Fun Ways to Get Your Children to Eat Their Vegetables 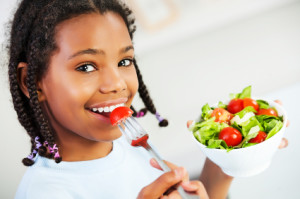 Mealtime is usually battle time in lots of households with parents striving to give their kids nutritious food and their children flatly refusing. In an age dominated by the internet, technology and junk food, vegetables have been pushed into the background. Lots of parents have been faced with the difficulty of getting their kids to eat veggies and the fact that most kids are picky eaters hasn’t helped. As a young kid, I was a picky eater (still am), in fact I didn’t start eating vegetables until I was older.

The good news is it is not impossible but it requires consistency and persistance from the parents, and it won’t be easy.

Incorporate veggies into their diet with these tips

The best predictor of a child’s eating behavior is the eating patterns of his/her parents. If vegetables and healthy foods are relegated to an afterthought in your household, it’s tough to expect your kids to take to them. Kids eat what they know, and they won’t ask for a special meal if they do not know it is an option.

Kids love make believe and games. Relating healthy food to fun things the child already loves and turning it into a game is a great way to get a few bites of greens down the hatch.

Cook with your child. Children are more invested in a meal if they help with the preparation. Taking your kids with you to the farmers market or grocery store and letting them pick one or two things to cook for dinner can make them far more excited to eat it later. Better yet, start a garden and teach them how to plant and harvest their own. Letting them clean carrots, snap beans, mix the dressing and set the table gives them a sense of pride and makes them more enthusiastic and cooperative at meal time.

Enforce the “one bite rule”

Research consistently shows that children who have initially rejected a food must be exposed to it at least 8-10 times for the food to be accepted. Many parents have had success with the “one bite rule,” requiring the child to try at least one solid mouthful of a rejected food whenever it is served. After enough exposures the food will be more familiar to the child and usually they begin to rate it more favorably.

Don’t force them to finish the meal

One bite is different from finishing your plate. One of the biggest misconceptions among parents is that forcing their child to eat a food she doesn’t like will get her to change her behavior. However, fighting and punishments create a negative meal experience, and the child will learn to associate food with the bad feelings. Negative food experiences have the opposite of the desired effect and actually increase picky eating tendencies. Require one bite, but try not to start a fight.

On the other side of the coin, creating positive food experiences can decrease picky eating tendencies. Research has shown that rewarding a child for trying one bite of an earlier rejected food makes it easier for them to try the food. They are also more likely to rate the food positively in the future.

Children could care less about health so telling them a food is healthy is unlikely to get you very far. On the other hand, most children feel limited by their size and wish to be bigger and stronger. Explaining that broccoli “helps you grow” is therefore more effective than, “it’s healthy” or “because I said so.”

One thing you have working in your favor is that children like colorful foods. You can expose them to more colors by adding more vegetables to their plates. While adults tend to like flavors mingled together, children often prefer them separate. So you may have better luck making separate vegetable dishes instead of a big, mono-color casserole.

Arrange food in patterns on the plate

Another reason to cook different vegetables separately is that children love when their food is designed into patterns on their plate. Unlike adults, who prefer foods clumped near each other in the center of the plate, kids like their food separated into piles around the perimeter. If you shape it into a heart or smiley face, they’ll like it even more. This is another way to make food fun.

Never jump to conclusions about what your child will or won’t like cause you never know until you try. Dont assume that because something is healthy, I’m going to have to work extra hard to get him to try just one bite.

Make your own fruit smoothies by pulping seasonal fresh fruit (bananas, strawberries, blueberries, peaches) in a blender. Add just enough juice or milk to make it liquid, and a little honey to sweeten the deal. Serve in a tall plastic glass with a thick and fun colourful straw.

Replace with fruits whenever you can

Plus you can sneak all sorts of dried fruit into fruit cake: start with a conventional Christmas fruit cake recipe, but double the quantity of dried fruit (in addition to the raisins and cherries, add other dried fruits such as apricots, peaches, mango, banana, cranberries, currants and strawberries). Replace 75 percent of the recipe’s butter with the same quantity of apple sauce.

Veggies don’t have to be just a savoury food. Think carrot cake and sweet recipes that include zucchini and other vegetables in the ingredients list. Your kids won’t even blink an eyelid.Use avocado instead of butter or margarine to spread on sandwiches.

Some children will be more difficult than others, and will require more effort and patience. It’s important to realize, however, that the habits they develop at a young age will remain with them long into adulthood. For your sake and theirs, it is worth solving picky eating problems as soon as possible. Continue to set a good example, create fun, positive experiences around food, let them help in the kitchen, enforce the one bite rule and do anything else you can to keep exposing them, in a pleasant way, to the healthy foods they reject. Your persistence will pay off.

How do you get your kids to eat their veggies? Let us know in the comment box below.