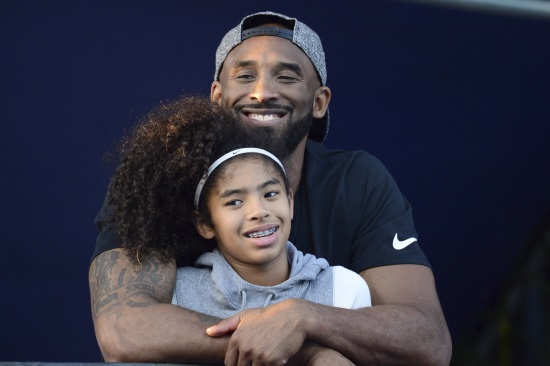 The loss of basketball great Kobe Bryant and his daughter Gianna, along with seven others, on Sunday in a helicopter crash has left millions of people shocked and feeling a bit lost. Not just because he was a legend of the NBA, but also because many are remembering him as an incredibly dedicated father to his four daughters. In fact, a tribute remembering Kobe Bryant as a “girl dad” has inspired dads from all over to celebrate their own daughters and hold them close in the wake of his sudden death.

ESPN’s Elle Duncan was one of the many public figures trying to process the death of the 41-year-old basketball legend with a tribute. As she shared, she had only met him one time, but that one meeting has stayed with her for a long while and resonates even more strongly now. Duncan explained that she saw him at an ESPN event and was hoping to get a photo with him, but when he spotted her eight-month pregnant belly he approached her to ask her if she knew what she was having. When she said she was having a daughter, she said “he high-fived” her. “‘Girls are the best,'” Duncan recalled Bryant said.

“I asked him for advice on raising girls seeing as though he quite famously had three at the time and he said, ‘Just be grateful that you’ve been given that gift because girls are amazing,'” Duncan said of their interaction. According to Duncan, Bryant went on to say “without hesitation” that he would happily have “five more” daughters if he could, because he just loved being a “girl dad.”

Elle Duncan with some beautiful words on what mattered to Kobe.1,6574:09 AM – Jan 28, 2020Twitter Ads info and privacy521 people are talking about this

Bryant was the father of four daughters — 17-year-old Natalia, 13-year-old Gianna, 3-year-old Bianka, and 7-month-old Capri — with his wife of 19 years, Vanessa Bryant. He was always vocal about his love for his family and his pride in his daughters, frequently taking to social media with proud pictures of his four “princesses.” And now his love for his daughters is inspiring dads to do the same. Reminding them to hug their girls tight, as one dad wrote on a photo of his daughters. “Heart still broken thinking about Kobe and his daughter,” one dad wrote with a photo of his daughters. “Been hugging these girls extra tight. Thankful for everyday.”

#girldad heart still broken thinking about Kobe and his daughter. Been hugging these girls extra tight. Thankful for everyday.

Another called being a girl dad the “best thing in the world.”

I love this #girldad trend. Hit close to home. I love being a girl dad. It’s the best thing in the world. Love you kobe miss you mamba

Another dad acknowledged that he always thought growing up he would want a son but now that he’s a girl dad, he “wouldn’t change it for anything in the world.”

Listening to Kobe’s comments about being a father of girls resonates so much with me. Growing up I always thought “Oh I can’t wait to have a little boy.” Now with Ruby, I wouldn’t change it for anything in the world. She is my everything.

Proudest #girldad I can be.

While Bryant undoubtedly had a long list of achievements in his life, this dad noted being a girl dad was probably his greatest of all. “No doubt Kobe’s greatest achievement was being a great #girldad,” he wrote.

No doubt Kobe’s greatest achievement was being a great #girldad

The loss of Kobe Bryant and his daughter Gianna, along with the rest of the people on board that helicopter, is an immeasurable tragedy. It is difficult to see the positive side because there simply isn’t one.

But if his pride in being a girl dad gives other fathers the opportunity to take a moment and celebrate their relationships with their own daughters, that is truly something to appreciate.