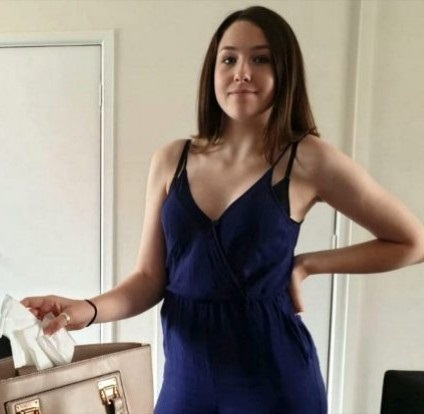 A schoolgirl, who suffers a heavy menstrual cycle, was refused a bathroom break by her teacher when she was on her period.

Maisie-Rae Adams, 14, said she was left with no choice but to storm out of the classroom when her teacher wouldn’t let her go to the bathroom to take care of herself. When she returned to class her bag had been taken to another room and she was told she was excluded from the lesson.

The teenager, who says she suffers from a heavy menstrual cycle that can see her having up to three periods a month, claims that her teacher at Rednock School in Dursley, Gloucestershire, told her to control her period.

Maisie-Rae said: “The class seemed to be in shock at what happened. I grabbed my pad and went to the toilet. When I tried to come back into the classroom the teacher told me that my bag was in another room and I could not go back to class.

Maisie-Rae’s mum, Kelly said: “When Maisie told me about it I felt so angry that I could cry. She is a mini me. With her confidence and even her shyness we are the same. I know how she feels. Maisie felt humiliated and embarrassed and it is horrible what happened to her. She should never’ve had a detention for needing to go to the toilet during her period.”

Kelly and her daughter now intend to introduce pink bands so that pupils can discretely tell teachers they are on their period, despite the school already having a similar scheme.

Mum-of-four Kelly added: “The school have said to us in the meeting that they have a pink card policy that the girls can show the teacher. Maisie was not aware of this though. I think it would be a good idea to get the girls wearing a little pink wristband and then it would show the teachers and others that the girl is on her period and that they may be a little emotional and unable to concentrate that week.

“I want to be able to go into the school and talk about what happens to the girls and we need to make sure that the girls are not ashamed of what is happening to their bodies.”

Headteacher David Alexander told Metro UK in reaction to the incident: “I can’t talk about individual students, however I can talk about what we do. We do allow students to go to the toilet for issues relating to their period.

“In fact we have ‘time out’ cards specifically for that purpose – we introduced to all girls in assemblies at the start of the year. Every girl had the opportunity to carry one. We are sensitive to the needs of all students but especially girls in this situation who are developing emotionally and physically.

“We provide free tampons and sanitary towels for those who need them. The situation is not as has been interpreted but I cannot go into details. Clearly we will reflect on this so that we learn from it and improve.”