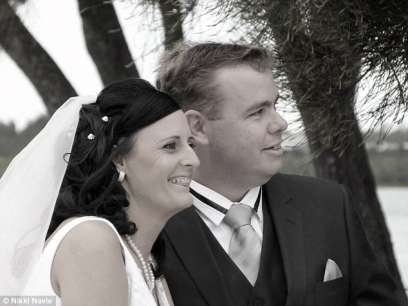 37-yr-old Meaghin McIntyre was five days away from getting married when she was told she had stage 4 cervical cancer. Surprisingly, her partner Scott insisted the wedding must go on despite receiving the bad news. The couple got married on the scheduled date at the Sunshine Coast without invited guests having knowledge of what was happening. The bride who spoke with Daily Mail Australia said:

“I couldn’t have asked for a more perfect day that’s for sure, we wanted our wedding day to be special, not feeling sorry for me for having cancer. It wasn’t a hard decision to make.”

The cancer cells had spread to her lymph nodes which was diagnosed after visiting three different doctors. She therefore needed extensive chemotherapy and radiation.

“I’ve had four rounds of chemo every three weeks, and they took about six hours to administer. I’m on a double dose, the highest strength chemo you can possibly get. Then I’ve had seven rounds of daily Monday to Friday radiation.”

The couple’s friends who later knew of the newlywed’s diagnosis gathered to raise funds on the Sunshine Coast’s Lake Kawana called Light Up The Lake. Her family also showed support by holding an event tagged ‘Shave For Meaghin’. The new Mrs McIntyre said:

“Between him [Scott], family and friends … I definitely couldn’t do it without them. When I was doing the chemo the first five weeks I was working half the hours I was meant to. You just get so tired, and then obviously after that I’m still not working at all now, not until January.”

After numerous treatments, doctors told her the worst was over. Though there haven’t been further scans due to inflammation she’s suffering from, the McIntyre family hopes that her treatment would be over by the end of January 2016.

“The longest part is done, I just think there’s a light at the end,”she said.


WHATS ON
Bride Diagnosed with Cervical Cancer Days to Wedding