Gross! This lady created an artwork of a foetus with her period blood (Photos) 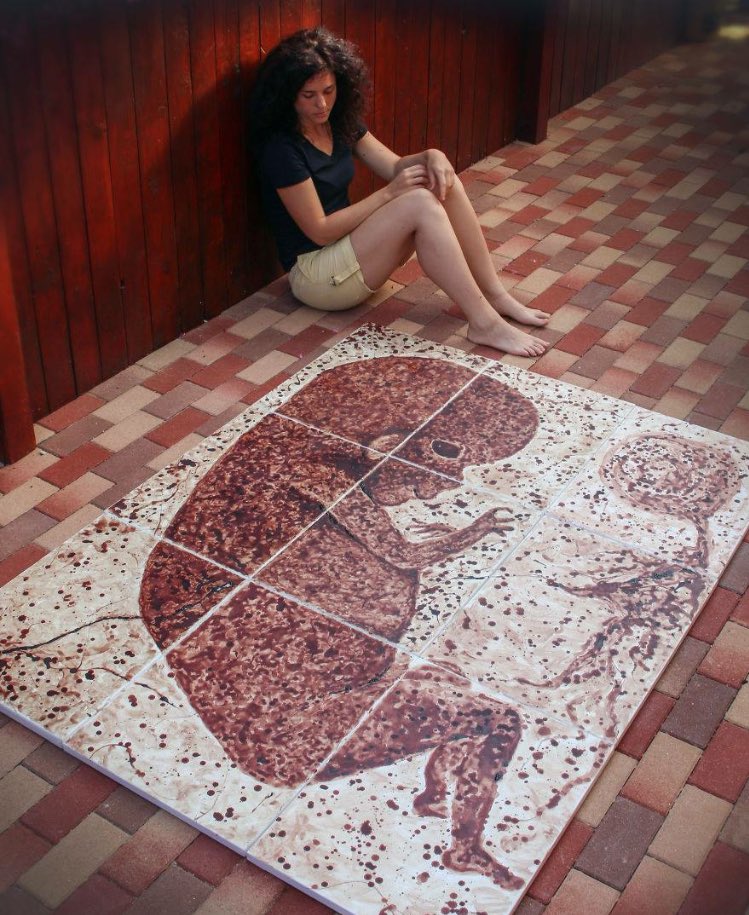 A Romanian artist created a painting of a foetus using her own menstrual blood.

28-year-old Timea Páll is a graphic designer and musician from Romania, Oradea, created the painting over the course of nine months and named it “The Diary of My Period”.

Describing her project, the artist wrote on her Facebook page,

“One drop of experiment and I realize the beauty of the pain, the value of the period, fertilizing my whole being. The periodic elimination of my ovum with my menstrual flow inspired me to give birth to something which has a biological end, and to create the start of the end.”

“The focus is not on the blood, but the work has its message because of the menstrual flow. Each month a woman has the chance to became pregnant, but with the menstrual flow the ovum is eliminated, and the chance to have a baby in not relevant at all. My concept with this elimination of the ovum, through the menstrual blood I gave birth to an artwork during these nine month and actually I created a “start of the end”… I feel that this artwork has a mission, even if it’s not able to see, to talk, or to breathe but maybe the audience will see, talk and breath instead of this little creature, independently from any sexual orientation, any skin tone or religious views… When an ‘ovum dies’ an ‘artwork is born’,” she stated.

Páll said that when she first thought of the project, she wasn’t sure if she could paint using period blood. And so she first drew a portrait of herself with her menstrual blood.

For the final painting, she painted one square of the image every month for 9 months.

She also said that the response to her project has been varied – it has been called “disgusting, gross, crazy, and weird”, “but, on the other side, so many positive messages and attitudes with great words, like fantastic, outside the box, original, wonderful, motivational, emotional.”

What’s Your Say On This Drawing?