“He barged into my room, covered my mouth while I was asleep” – 70-year-old woman raped by truck driver. 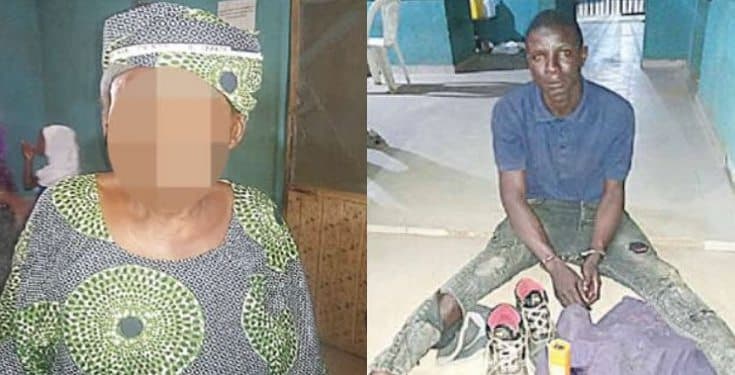 A 70-year-old landlady at Abule Lemode, Ijoko, Ogun State, has revealed her cruel encounter with a 25-year-old truck driver, Wasiu Bankole, who allegedly barged into her apartment and raped her.

City Round learnt that Bankole, who resides in the community, was drunk when he forcefully entered the woman’s house around 11pm on Tuesday.

Bankole reportedly overpowered the woman who was asleep and had sex with her.

The septuagenarian told our correspondent that Bankole covered her mouth, adding that she mustered strength to scream for help.

“The man (Bankole) came to my house at night. He forcefully entered my room and raped me. He covered my mouth so that I would not be able to seek help. I was the only one at home; my tenant was not around. I know him as a resident of our community.

“I was struggling to resist him but he overpowered me. I eventually managed to scream and people who heard my voice came to chase him away. I don’t know what would have happened to me without the intervention of my neighbours,” the woman recounted her ordeal to City Round in Yoruba.

Our correspondent gathered that one of the neighbours, who came to the woman’s rescue, Ayoola Oluwasegun, hit the suspect on the back with a stick to let go of the victim.

He was said to have reported the case at the Agbado Police Station and the Divisional Police Officer, SP Kuranga Yero, led a team that launched a manhunt for the suspect.

It was learnt that the team arrested Bankole the following day and recovered his clothes and a torch he abandoned at the woman’s apartment while he escaped.

“The suspect was arrested following a report by the victim who reported at Agbado Division that while she was sleeping in her house on June 2, 2020, the suspect suddenly broke into her room, held her down and forcefully had carnal knowledge of her against her consent.

“The victim stated further that it was one of her neighbours who heard her scream that came to rescue her by using a stick to hit the suspect on his back consequence upon which he jumped off her and ran away leaving his clothes, shoes and torch inside her room,” the Police Public Relations Officer in the state, DSP Abimbola Oyeyemi, said in a statement on Thursday.

The statement added, “On interrogation, the suspect confessed to committing the crime but claimed to have acted under the influence of alcohol. The victim has been taken to the hospital for medical attention.

“Meanwhile, the Commissioner of Police, CP Kenneth Ebrimson, has ordered the immediate transfer of the suspect to anti-human trafficking and child labour unit of the State Criminal Investigation and Intelligence Department for further investigation and diligent prosecution.”

Bankole in a chat with our correspondent admitted to being drunk but denied raping the woman. “I swear, I didn’t have sex with the woman,” he declared.

Asked how his belongings got into the woman’s apartment, he said he had no idea.

He stated, “It was some vigilantes who beat me with sticks. I am a truck driver. The only thing that is not clear to me is how my clothes got into her room. It appears someone wanted to frame me up. I was drunk but I didn’t have sex with her. I knew the woman through my landlady. She normally visits my landlady.”

Oluwasegun, explained that he caught Bankole molesting the old woman.

He said, “Around 11pm, the woman’s neighbour came to call me and some youths that she (the victim) was in distress. When we got there, we met the man (Bankole) on top of the woman. I used a stick to hit him on the back and he fled. The mark of the stick is on his back.”

In recent days, there has been a wave of protests against rape in the country following the gruesome murder of a 100-level student at the University of Benin, Uwaila Omozuwa, after she was raped in a church.

Less than a week after Omozuwa’s plight, another student undergoing a National Diploma programme in Science Laboratory Technology at the Federal College of Animal and Production Technology, Moore Plantation, Apata, Ibadan, Oyo State, Barakat Bello, was raped and hacked to death by some robbers.