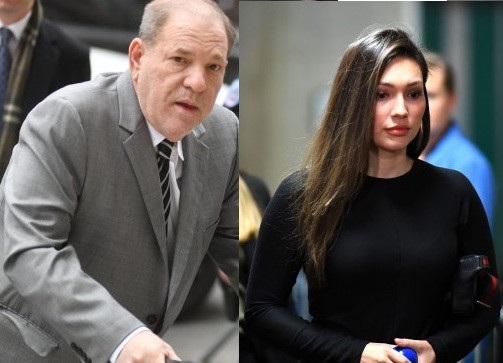 One of Harvey Weinstein’s rape accusers made shocking claims about the disgraced movie producer during his sexual assault trial at Manhattan Criminal Court on Friday.

Jessica Mann, an aspiring actress described the first time she allegedly saw him naked and claims he may be intersex, the court heard.

The 34-year-old detailed her allegations that Weinstein forcibly performed oral sex on her in March 2013 as she went into graphic detail about her alleged encounter with Weinstein, 61, in a New York City hotel suite.

Speaking to the jury, the woman recalled of their breakfast meeting: ‘I didn’t want to go up there but I felt I was helping him. ‘He started to undress himself a little bit. I thought he was getting comfortable and he walked into the bedroom. I hesitated… he said let me give you a massage and he took off his shirt.’

The actress said she told Weinstein she did not want to give him a massage and protested ‘for a good few minutes’.

‘He made me feel stupid, like why did I think it was such a big deal,’ she claimed in court.

She alleged that Weinstein offered to give her a massage instead and proceeded to take his shirt off and put lotion into his hand.

Sharing her alleged memories of his body, Mann said: ‘He had a lot, a lot of blackheads. The texture of that was uncomfortable.’

She added: ‘I did express that I was not sexual or comfortable with this with someone I don’t know.’ According to Mann, the producer ‘grabbed [her] arm’, closed the hotel room door and then ‘tried to kiss [her] like crazy’.

She told the court: ‘I was like, “Woah woah woah. I told you I wasn’t sexual and I don’t know you”, all this stuff trying to calm it down.’

Mann then made shocking claims that Weinstein does not have any testicles.

‘The first time I saw him naked I thought he was deformed or intersex,’ she revealed. ‘I didn’t know if he was a burn victim but it would make sense. He does not have testicles and it appears like he has a vagina. He does have a penis.’

Mann also claimed: ‘He also peed on me once. It was like being discarded after I served a purpose.’