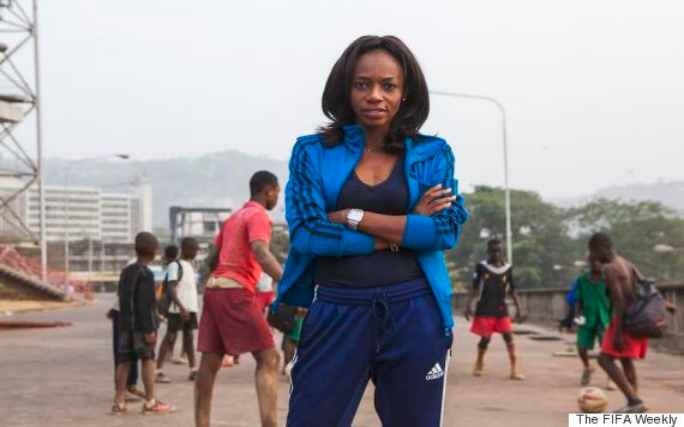 As a woman in england, becoming an powerful figure in football à la Karen Brady is no mean feat. But as a woman in a war-torn country like Sierra Leone, to be the most powerful person in football is practically unfathomable.Isha Johansen is the first female president of Sierra Leone’s Football Association (SLFA). She’s also the only female Football Association president in the world.However it is her dedication to humanitarian work that makes Johansen truly exceptional.

She’s transformed the lives of dozens of disadvantaged teenage boys in Sierra Leone through her project FC Johansen, which strives to keep boys in school by encouraging their love of football.
The are her words……….

“I think women are born natural carers. I think that as leaders, we go beyond the rhetoric,” Johansen tells HuffPost UK Lifestyle.

“We go beyond the politics and bureaucracy. We nurture, we care and we protect. It’s just a natural instinct that we have, hence the reason we seldom go wrong when it comes to decision making and building.”

“I was simply driven by a humanitarian desire to help some underprivileged young boys all under the ages of 11 who were playing football on a rocky slope just metres away from my home,” she says.

“I watched them for a few months and no matter what time my husband and drove past the patch, these boys would be tirelessly playing football.

“It then dawned on me that they had neither parents or guardians who really cared for them, or a home in the true sense of what the average person would call a home.

“That’s when I decided to step in and to cut a long story short, I struck a deal with them that if they promised to stay in school and do the educational bit, then I would support them with their passion for football.”

From there, FC Johansen was born.
“FC Johansen toured the world, showing the world that Sierra Leone was more than just a war torn country,” Johansen says.

“We were not just about doom and gloom we are a nation ready to rise above the ashes and take on whatever challenges are out there.”

Previously Johansen has been doing a great deal of work to improve the profile of women in Sierra Leone.

She established the Women of Excellence Awards, which acknowledges and honors women working in the region for their accomplishments.

So will she be assisting to bring football for women to Sierra Leone?

“Women’s football is a long haul in Sierra Leone but how can I leave office and not plan something at least for women’s football?” she says.

“Ebola has affected us greatly as it has in every other sector in our country. However, we hope that schools will slowly start to introduce female football as part of physical education syllabus.

Unquestionably, Johansen is an extremely inspirational woman, She just lately featured in the UN’s global campaign celebrating Women of Achievement.

So what encourages her to keep helping others?

“I’m inspired by those who have the conviction to rise above the odds, those who dare to challenge and those who are truly genuine to a cause and to their country,” she says.

“They do things for their country and not wait to see what their county can provide for them. If you fail then you simply dust yourself down and get going again.

“These are the kind of people who inspire me. Some are worldly and globally celebrated, some are in total oblivion living in villages but equally going through massive challenges and making huge strides for their communities.”