HOW TO WEAN YOUR BABY OFF THE DUMMY 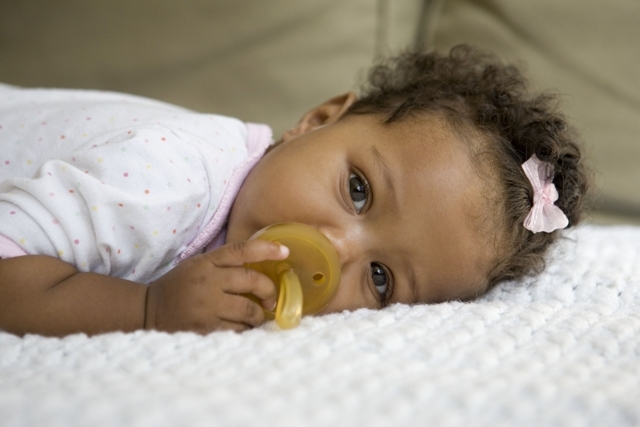 Most parents decide that their babies will never use a pacifier but when the incessant crying begins they somehow find themselves welcoming the dummy with both hands like the long awaited Messiah! It becomes a handy tool to soothe the baby. Getting the baby to quit the dummy though is going to be another uphill task.

The baby has already gotten used to it alleviate stress and adjust to new situations that would normally make him uncomfortable. Separating him from his best friend will definitely not be received well. Take it a day at a time, one small step after the other until the baby is completely weaned off.

Some babies like the dummy because it soothes them emotionally while others just like it because it is something nice to have. Identify why your child likes the dummy and this will help you to decide on what approach to use.

You can limit the time the baby uses the binky to daytime only. Even then you can create a rule and tell your child that it is only allowed indoors and not outside the house. Completely restrict it at night because they will probably want to use it to go back to sleep and knowing toddlers, it may be very often since they wake up on most nights.

If you were on a diet you would most definitely keep all the junk and sweet treats as far from you as possible so as to make temptation a little harder. In the same way, keep the dummies away from the baby and hide them as far as possible. That way the baby will not stumble upon it and remember that he had actually been looking for it.

An active baby has less time to remember the dummy. Introduce a new toy, take the baby out for walks, play a little more with the baby and by the time the day is over the little guy is so tired that he just drops off. Watch your baby carefully and if you see a little moment of weakness get the baby going to avoid the request for the dummy.

Take it away and never talk about it again. Well, the talking part may be unavoidable since your child is bound to ask for it at some point. You can explain to them why they can’t have it anymore and hopefully they will understand. Prepare yourself for some tantrums though before everything goes back to normal.

If your baby takes longer than usual to get off the binky it really doesn’t signal the end of the world. Be a little patient with the little one and they will eventually get over it. It really is not a vice to get your knickers in a twist about.

When not to do it

There are times when you plan to get the baby off the dummy but he falls ill or you move to a new neighborhood. It is not really the best time to separate him from it because that is the method they use to handle change and difficult situations. As soon as they are better or once you’ve settled in you can get back to your plan.

Why you need to do it

The earlier you start the detachment the better because it is easier to take a pacifier from an infant than from a toddler who has become completely attached to it (and whose tantrums can go to crazy extremes!).

The pacifier may interfere with the positioning of the tongue thus causing a lisp when they talk. Talking in itself may be a problem since the dummy is constantly preventing him from talking and removing it every time is a lot f work.

It can also interfere with the growing teeth. Toddlers of an older age may have their teeth coming out misaligned because of the pacifier. It is therefore worth soldiering on until the battle is won!


Featured , Toddler
BABY OFF THE DUMMY , WEAN , WEAN YOUR BABY