He pays no bills, doesn’t want sex, and it’s frustrating 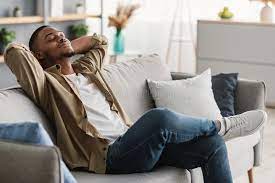 My husband and I have been married for about nine years now. He is 11 years older than I am. We have had three children together but one died when he was still a baby so we are currently raising two kids. My husband doesn’t work. I have been the sole breadwinner for this family from the outset. I actually don’t remember him working throughout the time I’ve known him. All the bills, whether school fees for the kids or food and other household bills, fall on me. He just stays home, constantly on his phone. Thankfully we don’t pay rent. We live in one of his relative’s homes. The relative isn’t around and asked us to sort of watch over the house while they’re away.

My husband completely lacks vision. All he wants is a charged phone and some internet and that’s it. It’s not like he’s doing something that earns him some cash on the phone or anything. The situation is so bad he will even ask the househelp to call and tell me when something is depleted in the house, regardless of how small it is. I’ve received phone calls about matchboxes and yet he’s right there. He can’t even buy a box of matches for crying out loud!

Related content: My wife is playing hard to get

Our sex life has also taken a nosedive because he says he is too old to be having sex regularly. He is only in his 40s and I’m in my thirties. We used to have sex at least twice a week, then it reduced to once a week, and now I don’t even remember the last time we did. Even when we would have sex, it would be after cajoling and begging him. Sometimes I’d even bribe him and all this for just a single round. He doesn’t go further than that. There’s a day I asked for sex and he said I’m being too much and I want to finish him. It had been weeks since we last had sex!

I got tired of begging for my conjugal rights so I stopped. These days I just focus on the kids when I get home from work and then I eat and sleep like nothing is wrong. I decided to love on myself a little more and I make sure my hair, nails, and outfit are always on point. I lost a little weight and always smell good and I honestly feel good about myself. Now he thinks I’m cheating on him!

Related content: Opposite personalities putting a strain on our marriage

I’m tired of this loveless, moneyless, sexless marriage and I’m ready to move on with my life. I’ve found love and would like to move out with my kids. My husband won’t even lift a finger to do the smallest of things, even replacing the drinking water when it runs out yet I bought it and made sure it’s available in the house. He waits for me to do this too. What is this man’s value in my life? This life is short and I can’t keep being miserable. What would you advise me to do?