I Regret Calling Buhari A Terrorist, Evil And A Paedophile – Nnamdi Kanu 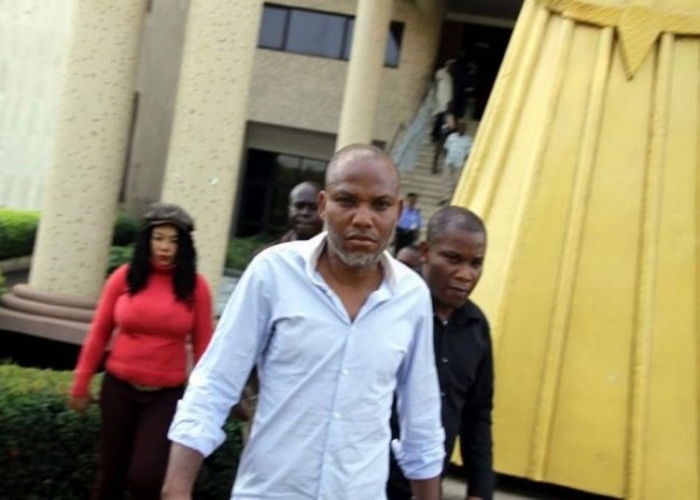 The leader of the Indigenous People of Biafra and founder of Radio Biafra, Nnamdi Kanu, has apologised to President Muhammadu Buhari for calling him a terrorist, evil and a paedophile in his radio broadcasts.

Kanu, who has been charged along with two others by the Federal Government before a Federal High Court in Abuja on six counts of treason and other ancillary offences, said he intended to write a private letter to Buhari to express his apology to the President.

He also apologised to former President Goodluck Jonathan and Igbo elders for “some uncomplimentary things” he said about them.

The 48-year-old pro-Biafran agitation leader, who is, however, unapologetic about his demand for a Republic of Biafra, has been in the custody of the Department of State Services since his arrest in Lagos on October 14, 2015.

He tendered the apology for his comment against Buhari and others in a statement which he made to the DSS on October 23.

The prosecution, in its summary of the case, alleged that in one of the radio broadcasts by Kanu on August 1, 2015, he expressed his resolve to actualise the Republic of Biafra and “cast aspersions on the person and the office of the President of the Federal Republic of Nigeria”.

The statement read in part, “Reference to the President of the Federal Republic of Nigeria as a terrorist, evil and a paedophile is regrettable and uncalled for and for that, I unreservedly apologise and will be doing so in a private letter to the President.

“Before PMB (President Muhammadu Buhari) there was the administration of Goodluck Jonathan. I also said uncomplimentary things about him and Igbo elders as well, which I now recognise should not have happened because it is un-African to be rude or insolent to elders.

“All I was trying to do is to draw attention to the problems afflicting society and something done about them.”

Kanu, who described himself as a Nigerian and a British citizen, justified his agitation for a Biafra Republic.

He said IPOB’s secessionist agenda was informed by the “incessant hardship, lack of holistic development in the socio-economic landscape of Nigeria, lack of youth employment, corruption in high offices and economic regression.”

He added that the agitation by IPOB, which, according to him, was founded in London in 2012 by a group of people from the South-South and South-East regions of the country, was in line with the United Nations Charter on the Rights of Indigenous Peoples ratified by African countries, including Nigeria.

In contrast to the counts of managing and a$$isting in the management of an unlawful society preferred against Kanu and two others, the Radio Biafra founder stated that IPOB, which the prosecution described as unlawful, was registered with the UN to pursue the rights of the people of Biafra.

He stated, “I can confirm that I, Nnamdi Kanu, is the leader of Indigenous People of Biafra worldwide as a legitimately and duly registered body at the United Nations pursuing the rights of a specific indigenous people, in this case, Biafra, to seek self determination according to the said charter.

“The reason for the formation of the Indigenous People of Biafra is to avail those referring to themselves as Biafrans the opportunity made available as a result of the United Nations declaration to seek the peaceful rebirth of Biafra in line with international law.”

Kanu, who is a son of a traditional ruler in Abia State, Sir I.O. Kanu, said he operated Radio Biafra, whose programmes “are designed to wake up the public from its slumber and address the issues of the time” because of his belief in free speech and freedom of expression.

Apart from Kanu, one of the two other defendants in the six counts filed by the Federal Government is a Field Maintenance Engineer, David Nwawuisi, charged with the responsibility of maintaining MTN masts in Enugu State.

The other defendant, Benjamin Madubugwu, was said to be living in the Ubilisiuzo, Ihiala Local Government Area of Anambra State, where he allegedly received custody of a container, housing transmitters, from Kanu.

On December 23 during the accused persons’ appearance in court for their scheduled arraignment, Kanu refused to take his plea due to what he called his lack of confidence in the presiding judge, Justice Ahmed Mohammed.

The judge promptly returned the case file to the Chief Judge of the Federal High Court, Justice Ibrahim Auta, for rea$$ignment to another judge and the three accused persons were returned to the custody of the Department of State Services.

The fresh charges were filed against the three men barely 24 hours after Justice Adeniyi Ademola, in a ruling on Kanu’s bail application on December 17, ordered his unconditional release from DSS custody having been detained for about two months without any valid charges filed against him.