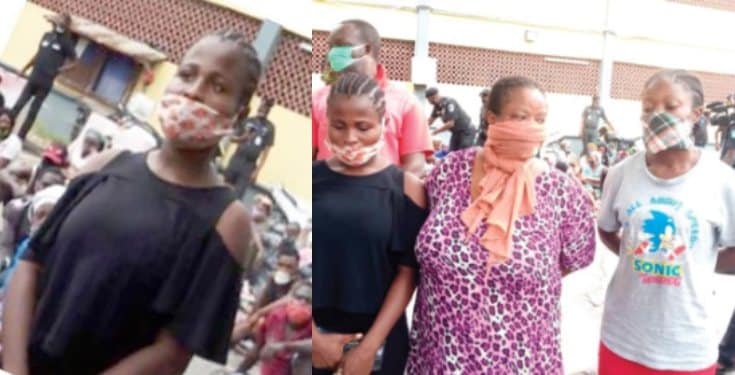 A 20-year-old woman, Miracle Kalu, that apparently became pregnant out of wedlock, delivered and put up for sale her newborn for N130,000, have been caught as well as her accomplices.


Kalu, from Ohafia, Abia state, explained the lack of money to care for her health problem and care for the baby compelled her into putting up for sale her 28-day-old baby.

The suspect said after she became pregnant, her boyfriend – whose residence she doesn’t know – denied been responsible for her pregnancy.

The bubble burst when two of her accomplices, Patrick Mbama, 41, and Ogechi Ekwebele, 30, were detained around 2a.m at Anthony, Lagos, while returning from Imo state.

Lagos state Commissioner of Police, Hakeem Odumosu, said the baby was crying in the vehicle and the supposed mother of the child, Ekwebele, was advised to breastfeed the baby but her hesitation raised other passengers’ suspicion.

“Upon questioning, this particular childless couple claimed that a childless man and wife in Lagos had paid for the said baby.” Kalu, who spoke to journalists, said she was an orphan and a secondary school dropout.

However, a police source disclosed that Kalu is notorious for selling her children, as it was not her first time of giving birth and selling her baby.

Okafor said it was the desperation to have a child of my own that pushed her into buying the baby. “Being barren for 15 years is not easy,” she added.