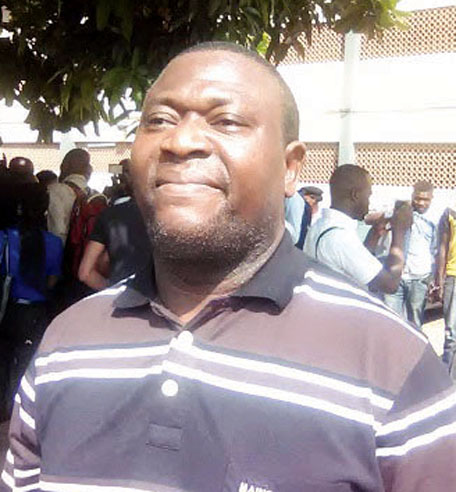 A 46-year-old school supervisor,  Adegboyega Adenekan, has been arrested by the police for allegedly defiling a 34 months old girl.
Adenekan, a supervisor in Chrisland International School in Victoria Garden City (VGC) Lagos, was alleged to have defiled the girl under the guise of teaching her sex education.
Commissioner of Police Fatai Owoseni, who paraded Adenekan yesterday at the command’s Ikeja headquarters, said the suspect was arrested following a complaint by the victim’s mother at the Ikeja Police Division.
He claimed that preliminary investigation showed that the pastor defiled the girl, stressing that the suspect would be charged to court.
Adenekan said he got a call from the pupil’s mother accusing him of defiling her daughter.
The suspect denied committing the crime saying:

“I am a teacher from that school; what happened was that on Friday,  November 11, I got a call around 8am from one woman and she identified herself as the mother of pupil. She alleged on the phone that I sexually abused her daughter. I then asked her, when, where did it happened, but after all said and done, she said, I want it between the two of us and I have not even told my husband. So when she dropped, I was disturbed.

Few minutes after that, she sent a text message to me telling me that she still wants me to remain friendly with her daughter because she knew her daughter holds me in high esteem. She said I should still be a friend to her and all that. I must tell you that I wasn’t myself throughout that day. Again, I got a call the following day, from a man who identified himself . It was an international call. The man also said that I assaulted his daughter sexually and I said, I don’t know what you are talking about, that even yesterday, your wife called me and said the same thing.

And I said, when could this happen in a nursery school where no one picks the children except the parents. You walk into the class and pick the child. I don’t know. I have never been alone with this girl, I have never bought any gift for her, and I had never taken her out anywhere. I was so shocked and the man ended the call when I told him all these. And immediately I called my head teacher, Mrs. Azike and I said Ma, this is the allegation I got from this parent which I knew nothing about.

“I want the police to do their investigation. I am ready to submit myself for investigation. I was told the girl is two years and ten months old.  I know God will vindicate me. I am married for 15 years with children.  The teacher of the girl is saying that nothing of such happened and that the girl never left her custody. This girl comes to school with school bus, from what I have heard, and then goes with her school bus. I am a supervisor in that school. I don’t teach. So the allegation that I teach the children sex education is so disturbing to me. I have never taught that girl, I have never taught in that class. She said she took the girl to one private hospital and it was confirmed that the girl was abused. I was told that I failed the lie detector test which I willingly made myself available for but I never heard of such a thing before. It was after that that I went online to research about polygraph. Before we got there, she first of all went there and paid for the test. She did all the arrangement before us and I failed the test.”