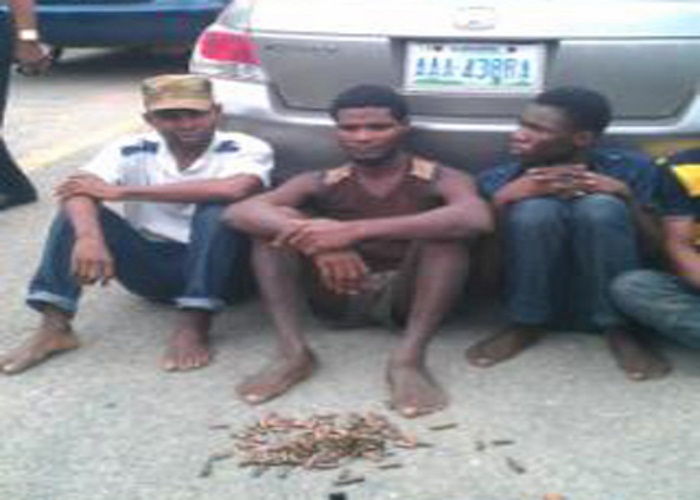 A suspected member of the armed robbery gang that attacked a bank in Lekki, Lagos in March this year says he was given only N50,000 from the operation that claimed the lives of three police officers and a teenage street hawker.

The suspect, an Ondo state indigene, who is one of the four arrested this week (all 4 pictured below), said 15 of them went for the operation and that he was the one that drove the speed boat that took the robbers to the crime scene and drove them after they had completed their operation.

“We were 15 in number that went for that operation and we used two speed boats. Five of us stayed back in the boat at Lekki while the other 10 went inside the bank. When they killed the policemen and two other civilians I queried them but they didn’t listen. I am the speed boat driver that took the armed robbery gang to Lekki on March 12, 2015. I didn’t want to go, they forced me, and after the operation, they gave me N50,000. I have not gone for robbery operation before now; I am into oil bunkering in Arepo along Lagos Ibadan expressway, a community in Ogun state. I know they were robbers when the contracted me to use my speed boat to convey them through the waterways to Lekki. I make money from oil bunkering between N50,000- N80,000 each time I go to work” he said.