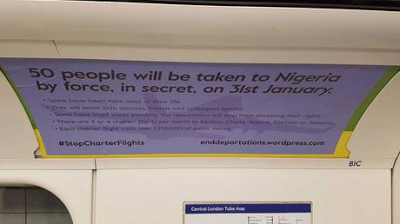 A gay man, is among the lots set to be deported to Nigeria today despite being concerned about his life due to his sexual preference.

The man, Oyekunle , had moved to London four years ago and claimed asylum due to the non-acceptance of the LGBT community in Nigeria. He is among the hundred others set to be deported on a chartered flight leaving for Nigeria and Ghana from Stansted Airport this week.

Speaking exclusively to RT, Oyekunle said he feared for his life should he be deported as both friends and family, do not want anything to do with him due to him being gay.

“I can’t go back. When I go back they will kill me,” he said on the phone from Colnbrook Immigration Removal Centre.

“I talked to him about five minutes ago… he’s feeling depressed, he’s not eating… he’s got medication for [post traumatic stress disorder], there’s a lot of medical conditions around him,”