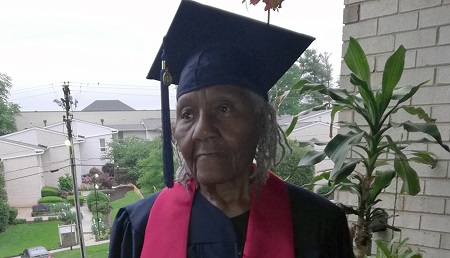 The mother of twelve who has lived through the Great Depression, World War II and the moon landing, among many other key moments in history, has become the talk of town after she successfully earned the degree.

Even while putting her 12 children through school by working full time, she never gave up on her dream of continuing her education. Growing up in rural North Carolina during the 1930s, Washington dropped out of school in the sixth grade to work on the family farm. But when she got married and had children of her own, she wanted to make sure they received a proper education.

“She has always been a lifelong learner,” Washington’s daughter Ellen Mitchell told Liberty News. “Her desire for learning and for pursuing an education became a family tradition. She taught all of her children how to read, write and do math prior to their beginning school, just as her grandmother taught her and her siblings.”

At age 49, Washington earned her GED diploma after completing an adult education program. But her main desire was to go to college, and so, in 2012, she enrolled in Liberty’s online program. And there’s no stopping her now. She says she plans to keep working toward a bachelor’s degree in history at Liberty, located in Lynchburg, Va.

“To me, history is a great subject,” she told Liberty News. “Everybody should know their history and learn more about it. A lot of people don’t know much about history. There’s nothing wrong with learning more.”

She added, “Education will help you make the best life for yourselves and those who come after you.”

In addition to Washington, more and more older adults are going back to college — and often back to a community college thanks to their affordability, convenient locations and ease of access. Often, community colleges allow you to sign up for a course or two to learn or sharpen certain skills. Or you can earn an associate degree in fields such as nursing, accounting and web design.