I’ve never had a boyfriend or husband, that’s why I’m this age – Madeline Dye, 106 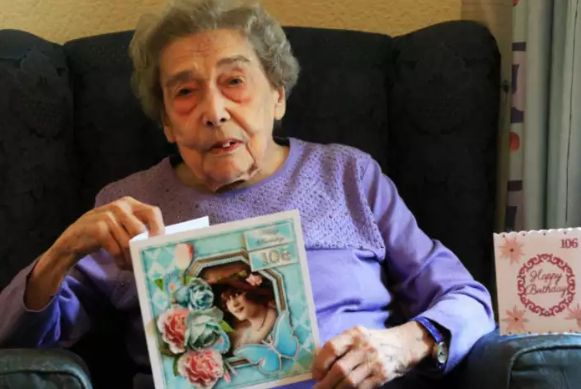 Madeline Dye, a 106-year-old former bookbinder, has revealed the reason for her long life.

Dye claimed her longevity is from the fact that she has never had a boyfriend, been married, or been on a date.

Dye, who marked her 106th birthday April 28 with a trip to Baslow with family and a celebration at the care home, said the first time she ever went to a pub was on her 90th birthday, and she had to move to a nursing home at age 103 after a fall.

According to her niece Diana Heaton, 80:

“She walks freely without a stick and is very independent.

When she was 103 she asked if I could change some curtains for her in a bedroom.

I said I would do it the next day and when I arrived she said ‘do you like the curtains – look what I’ve done?’

She changed them and carried some steps from the cellar up the stairs to her front bedroom.

She does still dress herself and goes into the common room and chats with people.

She has a great sense of humour still, she has never lost it.

Whenever anyone asks her about her past romances or if she has a husband, she says ‘I’ve never had one, that’s why I’m this age’.

She says she has not had the stresses of marriage, it’s tongue-in-cheek more than anything.

She has always loved her clothes and has always dressed immaculately”.

Dye’s long life and fitness may also be as a result of walking two miles up a steep hill four times a day while going to and from work as a bookbinder at Swinburns in Broadfield Road.