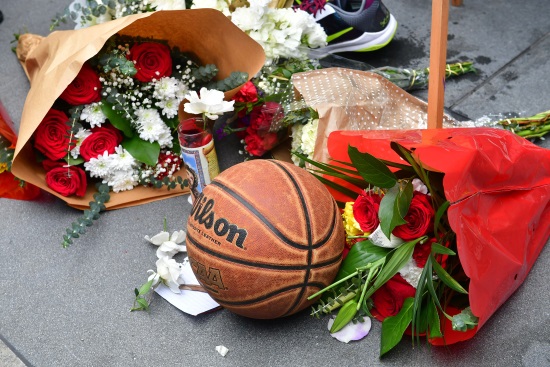 Shockwaves reverberated across news networks and social media when reports that Kobe Bryant and his daughter had died in a helicopter crash on Sunday, Jan. 26. As more details emerged throughout the day, it was revealed that college baseball coach John Altobelli, his wife, and young teen daughter are among the dead in the helicopter crash as well.

Nine people in total, including the pilot, died when the helicopter crashed into a hillside in Calabasas, according to The New York Times. The accident — which happened just before 10 a.m. in foggy conditions — also killed Bryant’s 13-year-old daughter, Gianna. The retired NBA star is survived by his wife, Vanessa Bryant, and their three other daughters: Natalia, 17, Bianka, 3, and Capri, 7 months old.

By Sunday evening, the identities of three other crash victims were revealed: John Altobelli, the head baseball coach at Orange Coast College, along with his wife Keri Altobelli, and their daughter Alyssa Altobelli, People reported. John and Keri are survived by two other children: a daughter Alexis Altobelli and a son J.J. Altobelli, who is a scout for the Red Sox, according to the publication.

“It is with the heaviest of hearts that we announce the passing of Orange Coast College head baseball coach John Altobelli. He was a coach, a colleague, a mentor and a friend at OCC for 27 years,” the school wrote in a statement published on its website. “Orange Coast College asks the media and the public to respect the privacy of John’s family and friends during this difficult time.

Gianna and Alyssa were teammates at the Mamba Academy, CNN reported. They were flying from to Thousand Oaks for a basketball game, OCC assistant coach Ron La Ruffa told the publication. “Coach Altobelli was a giant on our campus — a beloved teacher, coach, colleague and friend. This is a tremendous loss for our campus community,” OCC President Angelica Suarez said in a statement to The Los Angeles Times.

A Twitter user named Carlos Whittaker shared a photo of the Altobelli family, writing, “The 2 in the middle lost their mom, dad, and sister today. I’m sick for them. Literally nauseous.”

I can’t even begin to imagine what friends and family members of the crash victims are going through. My thoughts are with them as they mourn the loss of their loved ones.