I Just Wanted To Help – Woman Who Kidnapped 3-Year Old 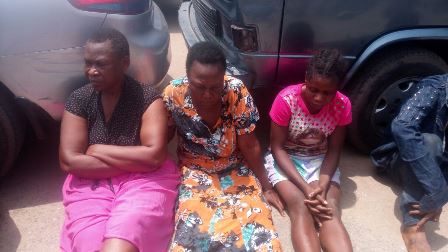 Grace John, 28, accused of kidnapping her boss’ daughter, Oluwasemilore Adebiyi, has confessed to committing the crime to enable the child’s real father get his daughter back.

John, alongside two other women- Rita Eze and Ugochi Nweke- alleged to be buyers of the three-year-old girl, were paraded by the police on Tuesday.

According to John, a certain Samuel approached her and told her that the baby’s mother, Mrs.
Oluwatobiloba Adebiyi was his lover and got pregnant for him before marrying another man.

But John said: “Samuel told me the woman was his former girlfriend who married another man and that he wanted to take his child from her for proper care.
“Samuel took me to the woman’s shop in Alagbado. I pretended that I want to learn bead making from her and we agreed on the modalities.
“After seven days, I told the woman I was going to buy gala and I took the girl with me to Kola bus stop where I met Samuel, who instructed me to take her to his grandmother in Onitsha, because he is in school.
“The following day, I boarded a bus to Onitsha and met the woman (Rita Eze). I handed over the child to her and she gave me the sum of N60, 000 for transport.
“I never knew the child was not Samuel’s and I have never thought what I did was kidnapping. I just wanted to help a man who cried to me that his child is not being properly taken care of. I have not done it before.”

She said: “I met my old friend at an event in December and she told me her nephew (Samuel) has a child they need someone to take proper of.
“She gave Samuel my number and he called to say his girlfriend will bring a child from Lagos. When Grace brought the girl, Samuel told me to sell the girl which I gave to Ugochi.
“Ugochi gave me N500, 000. I gave Grace N60, 000 and took N40, 000. I sent the rest to Samuel. I never knew him before; I thought the child was his.  I never knew the child was kidnapped. I only accepted to help sell the child because I needed money to pay my house rent.”

Nweke denied knowing the baby was kidnapped, adding that she didn’t collect a dime from the deal.

Nweke said: “I told Rita if she has or know any motherless child that I have someone who is in need of a child to adopt and she told me she will get back to me.
“When she called me that she has the child, I asked if it is genuine and she said yes. I informed my friend who provided the money. I never took anything from the money. I handed everything to Rita.”

According to Police Commissioner Fatai Owoseni the suspects would be prosecuted at the conclusion of investigation.