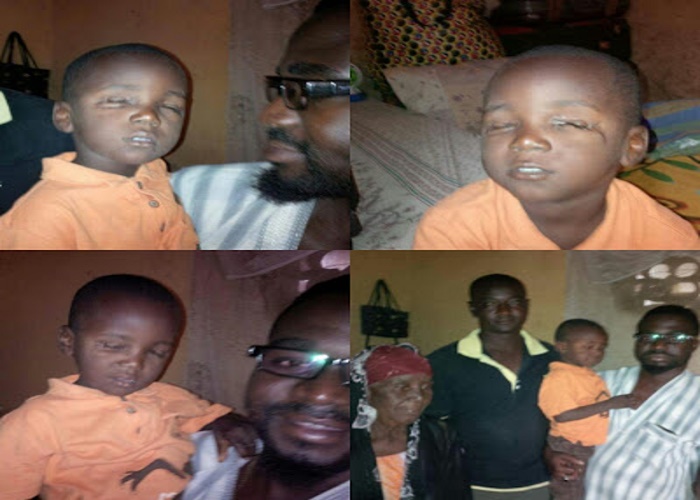 Journalist Femi Owolabi shared the photos and story on facebook, he wrote:

“I didn’t want to share this before, but I just have to, so that we are all aware.

Since my recent journalistic focus is on reconstruction and resettlement of the internally displaced persons in the North-East, I didn’t really pay a keen attention to Abu’s case. Especially when I heard that the Kaduna State government, under the leadership of my friend, Nasir el-Rufai, had risen to the boy’s case– pledging to see to his welfare and education.

A very good friend, recently, raised Abu’s issue with me and insisted I go check on him. My friend is interested in Abu’s education. “I wanna ensure this boy go to school so he becomes somebody in life,” my friend said.

Fors weeks, I was calling the Kaduna State Police PRO so I will be able to track Abu in Zaria. The officer wouldn’t pick my calls, neither did he return them. As a journalist, I then used other techniques to locating Abu and his family in Zaria.

I spent some moments with Abu and his family today in Zaria.

In the coming week, I should publish a comprehensive report on Abu.

What saddens me? The Kaduna State government hasn’t redeemed its pledge; of taking care of Abu and seeing him through school! Abu has been abandoned! “We were only given N180,000 and nothing else since then,” Usman, Abu’s father told me.

The good news? Help is on the way for Abu! I won’t leave Zaria until we enrol him in a school I found for him today!”