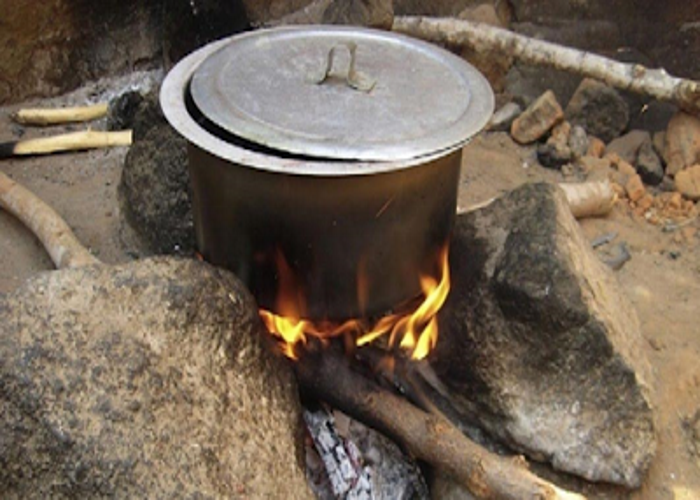 The hardship brought about by the current economic recession in Nigeria has given rise to a spate of insecurity. According to a report by The Guardian.
In Kwara State, cooking a pot of soup is now an invitation to robbers, as cases of eagle-eyed hungry men absconding with cooked food still on the fire is now a daily occurrence.
The incident is widespread in areas without perimeter fencing and among women who cook or have opted to cook with coal pots. At each of such areas such as Tanke, Basin, Sango, Offa Garage, and Kilanko, the incident according to The Guardian investigations occurred over five times in just a week.
According to Alhaja Hamidalat Olawale at Sango:

“I was cooking around 5.00p.m. in readiness for the breaking of the fast for the day. It was beans and I decided to use coal pot at the open backyard. I had added all the food condiments and was waiting for the broth to dry up. But to my greatest surprise, I did not see the pot of the beans again.

“I was shocked discovering this. What amazed me was that the thief did not come for it before it was ready; he or she came when the food was ready and we were already salivating, meaning the person must have been closely monitoring me.”

Another victim, an undergraduate of the University of Ilorin, Anita Bazuaye, said it was her pot of soup that disappeared beside her window.

“It was painful because as a student, it was difficult for me to get money again for another soup. In fact, when I managed to start cooking again, I did not leave the place until I had securely packed the pot inside my room.”

Reacting to the development, the Police spokesman, Ajayi Okasanmi (ASP), said no formal report to that effect had come to him or anyone within the state command, but warned that.

“It is a serious matter and we will not take it lightly with anyone caught in the act. The Penal Code frowns at theft and we will treat anyone in the act accordingly.”

A former chairman of Nigeria Labour Congress (NLC) in the state, Emmanuel Ayeoribe, said the development could not be divorced from the non-payment of workers’ salaries.

“If nothing is urgently done to commence regular payment of salaries, very soon, people will start leaping over the fence to steal food, not just from unfenced quarters,” he warned.