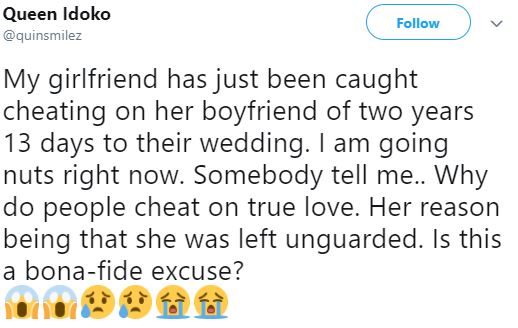 Nigerian activist Queen Idoko, has taken to Twitter share a shocking story of her friend who slept with her fiance’s friend just 13 days to their wedding.

According to Queen, the incident happened after the groom sent the bride to pick up something from his friend who she described as the best looking dude she has ever seen.

Queen however tried to defend her friend, claiming that the fiance shouldn’t have tempted his wife-to-be by sending her to his good looking friend and that her friend fell for the guy because she was left unguarded. Read her tweets below: