Lady Who Jumped Out Of Kidnappers Trunk Recounts Story 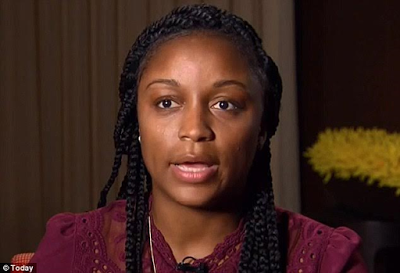 Last week, a video showing a brave kidnapping victim jumping out her kidnappers car trunk, escaping to safety., sent the internet wild.The woman has been identified as Brittany Diggs, 25, and she has shared the story of how she was able to pull off the escape.

In an interview with the Today Show, Brittany, a nursing student, recounted how she was threatened to be killed should she refuse to withdraw cash from her bank accounts and ATM card. Brittany said he forced her into her car trunk and was driving her to Birmingham where he was to withdraw the money.

“The whole time he’s driving, he’s, like, just, he’s yelling at me from the front seat, ‘You’re lying. I know you have something. Give me your money,'” she said.

He withdraw money from his victim’s account first at a gas station then stopped at another gas station to withdraw more money from her account. He also threatened to drive the car into the river so she’d drown should the card not work. She panicked which gave her the idea of using the light on her insulin pump to illuminate the trunk and help her find the inside latch.

“I just got the bright idea to use my insulin pump light, which is not a bright light, but it was bright enough to see. So I had to put it right on top of it to look and see for the latch,” she said.

“I’m holding the latch like this, waiting for him to get back in the car. He gets in, he’s yelling … and I feel the car reversing, and he’s pulling out pretty fast, so I’m, like, ‘Oh shoot – I better get out of here.'”

“I try to put it in the back of my head so I can just get through the day, but that was the scariest thing that I’ve had to do. It was just a lot because I’m not from here, I don’t have the support system down here besides my roommate. I just felt like it was a lot.”