Lady narrates how she saved girl, 13 who snuck out of the house for a blind date with her Facebook lover 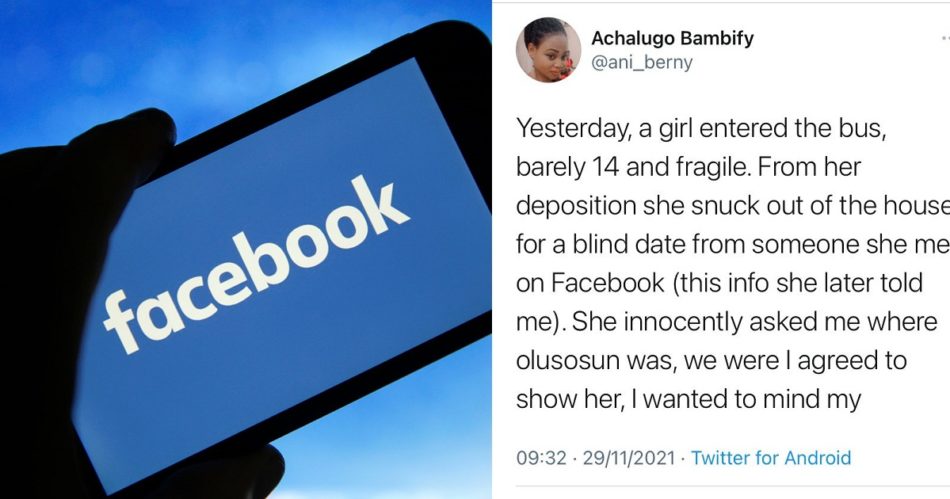 A Twitter user has narrated how she saved a 13-year-old girl who planned to go on a blind date with a man she met on Facebook.

Achalugo Bambify on Twitter said, she met the little girl in a bus heading to the address where the man had asked that they meet.

Yesterday, a girl entered the bus, barely 14 and fragile. From her deposition she snuck out of the house for a blind date from someone she met on Facebook (this info she later told me). She innocently asked me where olusosun was, we were I agreed to show her, I wanted to mind my Business until her phone rang and she was telling Bros that she’s coming to the cinema soon…

Me ??? cinema, where? Olusosun ke, I noticed her anxiety with childlike excitement and was triggered to tell her that we are stopping at the same place. Oga said he was at the bus-stop.

When we dropped I noticed a black Benz with shabby looking guys staring suspiciously, her phone rang again and he told her to stop talking to strangers, take a bike and come to xyz address. She looked at me and was “I can go from here, I know me place”. Counseling mode activate.

I simply asked for a hug and while hugging her, I told her not to do anything her parents won’t be proud of, “you are loved, there’s time for everything and you are so pretty” she chuckled and I gave her small change with my card to call me if she feels like. I watched her turn.”