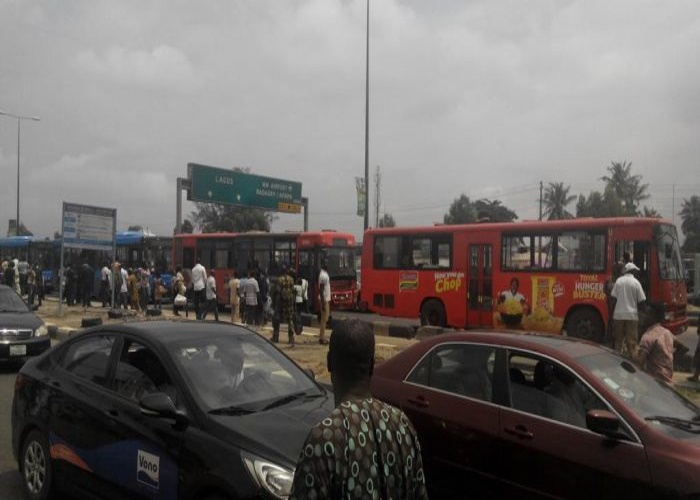 The Lagos State Government has clarified the misconception surrounding the unfortunate incident where a street hawker was knocked down by an oncoming truck at Maryland Bus Stop on Wednesday. The street hawker, who was trying to evade arrest from officials of Kick Against Indiscipline (KAI), had attempted to cross the road before being hit by the truck, which was erroneously thought to be a BRT Bus.

As a result, hoodlums armed with sticks and stones, immediately descended on some BRT buses plying the route as at the time of the incident and in the process destroyed several of the BRT buses.
But the Government in a statement signed the Commissioner for Information and Strategy, Mr. Steve Ayorinde, said that contrary to the information being circulated in the social media that the street hawker was hit by a BRT bus, it was a truck belonging to a soft drink company that unfortunately hit the boy.
“It wasn’t any of our buses that killed him (hawker), it was a soft drink company truck that unfortunately crushed the boy while he was trying to escape from KAI officers who were on patrol trying to rid the street of street hawkers and traders.
“But hoodlums now took advantage of that to start destroying government assets, including several of the brand new BRT buses,” he said.
Ayorinde said it took the intervention of a team from the Rapid Response Squad (RRS) to quell the riotous scene caused by the hoodlums before the corpse of the boy was taken to the morgue at the General Hospital, Ikeja.
The Commissioner said that at least three hoodlums alleged to have been part of the mob that destroyed the BRT buses have been arrested, saying that the law would take its full course.
“The Lagos State Government would like to use this opportunity to further reiterate that it would not relent in ridding the state of illegality, street trading and hawking,” he said.
Ayorinde said that Section one of the Lagos State Street Trading and Illegal Market Prohibition Law 2003, restricts street trading and hawking in the metropolis, while Sections Seven and Eight of the same law gives jurisdiction and power to the Special Court to order the seizure and public auction of items impounded from street traders.
Section 10 of the law, he said, also prescribes a N5000 fine or three months imprisonment upon conviction.
“Street traders are hereby urged to desist from this illegal activity because the government will not be blackmailed and would do that which is necessary.
“And for the miscreants and hoodlums, the Lagos State Government and the Police Command would not allow any act of civil disobedience and those arrested would be dealt with in accordance with the law and further arrests would be made as investigation continues,” he said.