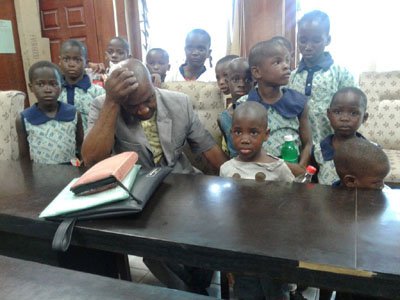 Twelve children were rescued by the Lagos State Government from the custody of a Pastor, Onoyngu Chibuike, the founder of Voice of Salvation Charitable Organisation, who had been operating an illegal orphanage in Ojo since 2010.
The hands of the law caught up with Chibuike last week when one of the children took ill and was taken to hospital for medical attention. Enquiries from the hospital about the medical history of the indisposed child revealed that Chibuike’s orphanage is not registered under the Lagos State Government.
During interrogation by the Commissioner for Youth and Social Development, Mrs Uzamat Akinbile Yussuf, at Alausa Secretariat Ikeja on Monday, the pastor claimed that he received a call from God to start the orphanage over six years ago to rescue helpless children from societal vices and misdemeanour and thus registered the orphanage with Corporate Affairs Commission (CAC) in 2010.
He said:

“I am from Anambra State. I am called by God to render this service to humanity by helping the less privileged, such as widows, motherless children and homeless people. I provide adequate care for these children till their parents can take over their care. For those that were abandoned, I train them even up to university level.”

According to him, the children were acquired through different means.

“Some of these children here were brought to me by the police, some were brought by their biological mothers, who in some instances claimed they had the children out of wedlock and they cannot attend to the needs of the children or shoulder their responsibilities.
“Based on this, the person will put down his or her name and we will accept the child in order to assist the child. Our affection is on children because we know that if we reject any child, chances are that the children are exposed to the wrong sides of life and might die in the process. Based on this, we will accept the child and take care of the child,” he stated.

The Commissioner told the pastor that disciplinary actions would be taken against him after further investigations that would be carried out by the police. Ignorance is not an excuse under the law, she said.

She said: “When you operate an illegal orphanage in Lagos, it is a criminal offence. Your registration with CAC does not give you any licence to operate an orphanage in Lagos. Here we operate with the law that guides us. Orphanage is not a charitable organization you feel God has guided you to go and assist people.
“We are talking about children here and there is a law in place protecting the rights of these minors. The Lagos State Child’s Right Law of 2007 guides all the children that live in Lagos State. Whatever you need to do, you need to be well guided by the law. You don’t just operate at will, being led by the Holy Spirit to assist the less privileged is a good idea but you have to operate within the ambit of the law that guides your engagement”

Twelve of the 15 children in his custody have immediately been taken over by the State Government until suitable homes are secured for them. Two were still with the Voice of Salvation orphanage as at the time of the interrogation but would also be taken into proper care of the state government while the last one child who is still in the hospital would be monitored by officials of the ministry.
Chibuike was handed over to law enforcement agents for further investigation and disciplinary actions and was also ordered to provide the case file documentation on all the children in his orphanage.
He pleaded for mercy, adding that the work he is doing is a directive from God. He has been ordered to provide case files on all the children in his orphanage.
The Nation