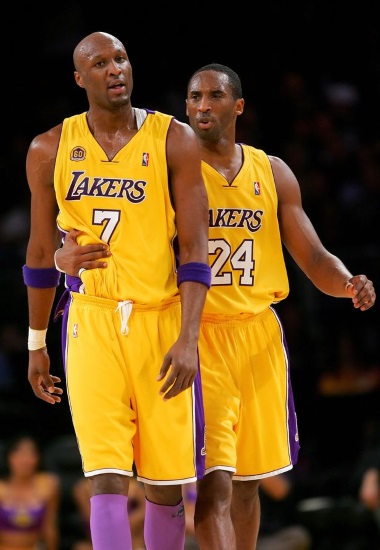 The 40-year-old former NBA star has also described the pain of losing his “brother” as the most hurtful since the death of his infant son in 2006.

Speaking on Good Morning Britain, Lamar said that he was still mourning his friend and was holding back tears as he spoke slowly, saying: “It seems rather surreal. It feels like a long-lasting nightmare.”

Lamar continued to say that the heartbreak is as bad as when his six-month-old son Jayden died from sudden infant death syndrome.

Sitting alongside his fiancée Sabrina Parr, he said: “I haven’t felt a pain or a shock like this since my son passed away in 2006.

“I’m gonna miss him dearly. His tutelage. His strong will.

“I’m just blessed I was able to rub shoulders with that man, and have a little bit of that magical dust sprinkled off on me.”

Kobe Bryant was tragically killed when the helicopter he was in, crashed in the Calabasas mountains.

The crash killed all nine passengers, including the NBA legend’s 13-year-old daughter Gianna.

Lamar continued: “I know I’m feeling really bad and his fans are, I can just imagine how his children and wife and his mother and father feel right now.”

Lamar had previously posted a tribute on Instagram in the wake of hearing the news of Kobe’s passing.

He wrote: “He taught me so many things in life that were necessary on and off the court.

“On the court he taught me how to carve out defenses and how to take my time.

“How to make winning my ultimate goal. Off the court he taught me to sign my own checks lol.”

He also admitted that he would have saved Kobe’s life instead of his own, when he overdosed in 2015 and suffered 12 strokes and six heart attacks while he was in a coma.

The basketball star said: “No way God took my brother this early. I know I been through my own stuff in life with using drugs and not being good to myself.

“When I went through that Coma situation if God would have came to me and said we would take me and spare Kobe I would have rather that happened.

“In honor of my brother I’m up at 4am tomorrow to get to the gym! I love you brother.”