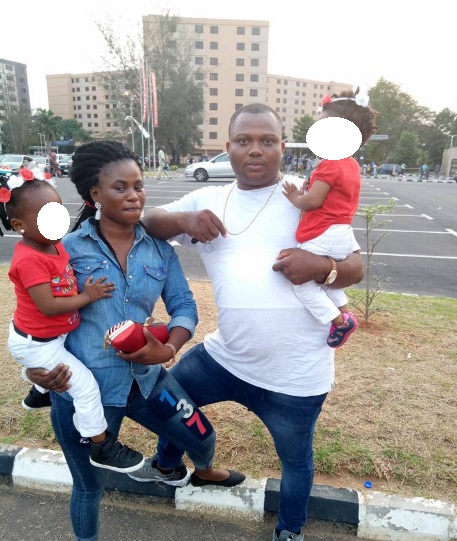 A landlord together with his wife were detained right after the wife slashed a tenant’s face over overdue bills.

Ubasinachi Ekweozor along with his wife Anulika Ubasinachi Ekweozor are in custody in Ikotun Police Station after the assault on their tenant Oyize Peter over overdue water and energy bills at their property at No, 78, Amudalatu Agodo, Ikotun, Lagos.

Based on reports, Oyize was in arrears of electricity bills and so the electricity distribution company disconnected her house. The landlord was infuriated by this due to the fact the tenant’s house was also linked to the pumping machine that serves the whole compound.

The landlord therefore called an electrician to re-connect the machine’s wire to his own flat. He at the same time got a plumber to disconnect Oyize’s pipe so she wouldn’t be able to access water.

The victim was immediately rushed to the hospital while the couple were arrested.

Below are graphic photos of the victim’s injuries and also the landlord and his wife.

Oyize refused to be sidelined in this manner so she objected and it led to a verbal altercation.

Eventually, after calm was restored on Sunday, March 29, Oyize was doing house chores when the landlady allegedly took her by surprise and used an axe to slash her on her face, leaving her with several lacerations.