Late preacher, Jesu Oyingbo’s family begin demolition of his estate over contention among his 153 children 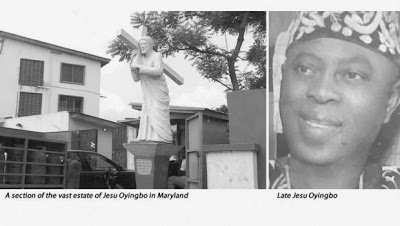 Some children of late preacher, Pa Immanuel Olufunmilayo Odumosu, popularly known as ‘Jesu Oyingbo’, led by his daughter, Princess Adeyinka Immanuel Odumosu have begun the demolition of some parts of his estate situated at Maryland, Lagos.

The estate which has been in contention among his 153 children, according to Odumosu, had to be demolished because some parts of it were gutted by fire in 2009.

“It is not that we intend to demolish the entire estate, but what actually happened is that some parts of the estate got burnt in 2009. Because the matter was then in court, we couldn’t do anything. So we left it like that for almost eight years.

“Hoodlums took over the entire place; over 2,000 of them. We had cultists and fraudsters living in here.

“Some government authorities normally come here and they saw the condition of the house and they warned us that if it collapses and people die, the government will take over the whole place. So in 2015, I came into the estate. I wrote to the (Ministry of) Environment that they should come and test if the building can still stand so we can renovate. They came and they said the building is gone, she explained.

Odumosu disclosed that all these structure were built a year after she was born; and in some months, she will be 60.

She also revealed that out of the 153 children fathered by the late controversial preacher, seven of them from different women, under the umbrella of J7, came together to hijack the estate from the eldest son, Otunba Kayode when he was alive.