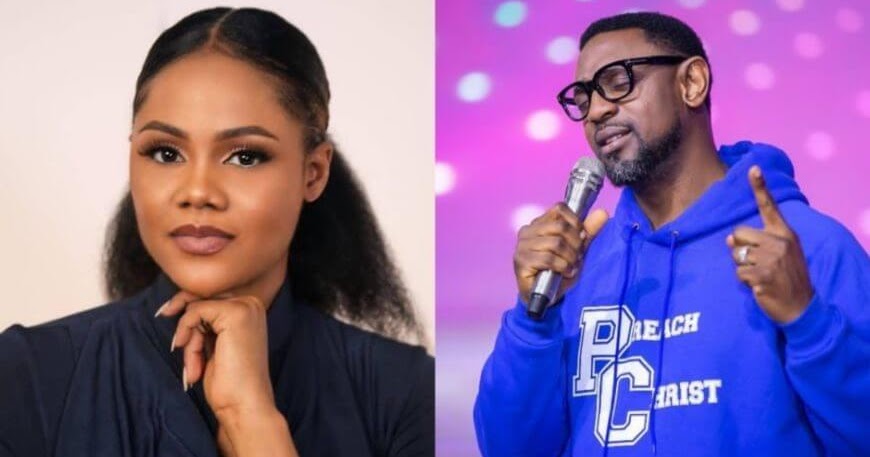 Many people, both in and outside Nigeria are aware of the case where Busola Dakolo accused Pastor Biodun Fatoyinbo of raping her when she was a teenager. The matter was taken to court and Bukola informed the court that Pastor Biodun forcefully pushed her down on a couch near the front door of her house before proceeding to pin her there, undress her, fondle her breasts and waved his genitals in her face. He then forced her to drink from a soda bottle all the while preventing her from screaming as he raped her. After the deed was done Pastor Biodun threatened her life.

Unfortunately, on Thursday, the court sitting dismissed her case on the grounds that it was an abuse of the judicial system. The case was deemed empty and essentially based on sentiment without hard proof. The judge went on to proclaim that the aim of the case was one of cruelty rather than for getting justice and Bukola was fined an amount of N1 million. In fact, the judge stated that the amount should have been 10 times more considering how much of the court’s time was wasted.

There are diverse opinions regarding this rape case, some people agree with the judge while many others are outraged over the injustice done to her.

But for parents, especially those with young female children, it also serves as a lesson.

Parents often teach their children different ways to keep themselves safe. They are taught how to watch a hot stove, they are taught to look both ways before crossing the street, they are taught not to take things from strangers. But most times, they aren’t taught much about sexual abuse or body safety till they are much older – sometimes much too late.

Sexual abuse can happen to children of any age and religion. In fact, more and more cases are happening with so-called pastors who claim they are “taking good care” of your child and you leave your children with such people because you believe they are “men of God.” This isn’t to say that all pastors are potential rapists, but it doesn’t mean you should let your guard down. There isn’t any foolproof way to protect your girls against sexual violence and abuse but there are steps to take to reduce the risk of it happening.

If it does happen, do not blame yourself and especially not the child – which is often the first reaction of many parents. And this is why these children are usually afraid to speak up – which was the case for Bukola.

Here are some precautions you can take to help protect your preteen and teenage daughters from rape and sexual violence.

Name all the body parts and discuss them with your daughters very early. You’d be surprised how many children call their vaginas their bumbum without knowing the implications. Teaching your children the actual words for their body parts gives them the ability to approach you and clearly let you know when something inappropriate has happened.

TEACH THEM WHICH PARTS ARE PRIVATE

Once you’ve discussed body parts with your girls, the next thing is to teach them the parts that are private as well as the fact that they are private because not everyone should see them. Mummy can see them naked but anyone outside of the home must never see them naked. You should also explain that a doctor can see them without their clothes but only because mummy and daddy are also there with them and the doctor needs to check their body so they can be healthy.

You must let your child know that her body is her own and as no one has a right to touch her, so also she should not touch anyone else inappropriately. This includes things like hugs or tickles from other people, including people she is familiar with or other things like sitting on someone else’s lap or meeting them in a secluded area.

ASSURE THEM THAT THEY WON’T GET IN TROUBLE

Many perpetrators often tell young girls to keep the abuse a secret or use threats to keep them quiet about the abuse. Sometimes they do it in a friendly way like, “I like playing with you, but if you tell anyone else about it, they won’t let us play again,” or they threaten by saying something like, “Keep this a secret, if you tell anyone else, I will deny it and you will get in a lot of trouble.”

In Busola’s case, she was threatened by Pastor Biodun and became scared to even tell her family for fear of getting in trouble until it was too late.

Remind your child as often as possible that they won’t get in trouble for talking to you and that no matter what anyone tells them, secrets are not okay and they should always let you know if anyone tries to make them keep such a secret.

When they do talk to you, follow through on your promise and do not punish them for speaking up.

KNOW WHAT TO LOOK FOR

As a parent, take note of people – teachers, friends etc – who like to spend an unusual amount of one on one time with your child – especially in church or with reasons like private tutoring and even sleepovers.

Take note of people who consistently prefer the company of children, who contact your children in your absence, are extremely interested in your child’s romantic life or who often buy your teenage daughter gifts for no reason.

But whether your child is a young girl or teenager, help her understand the dangers of being alone with other adults – familiar or not.