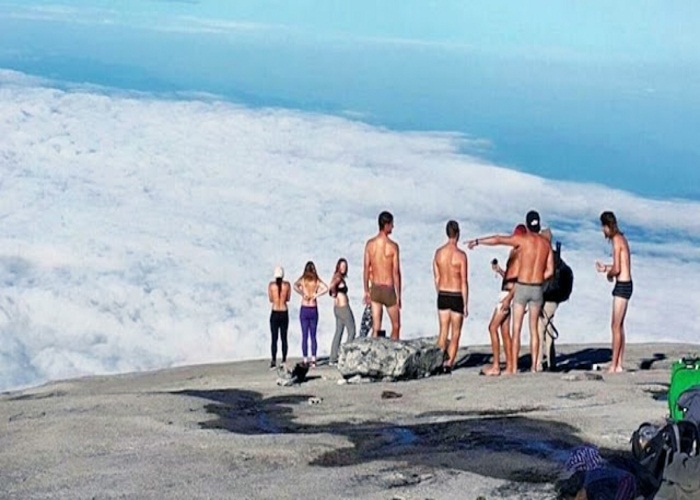 A Kadazandusun chief has demanded that tourists who posed naked at Mount Kinabalu in Sabah pay a fine of 10 buffalo, the Daily Mail reported yesterday.

The chief said tourists should to pay a “sogit” or fine of 10 buffalo or face jail, the British daily reported.

“The tourists who angered the guardian of the mountain should pay for their mistakes by giving sogit,” Tindarama Aman Sirom Simbuna was quoted as saying.

“This should be in the form of 10 male or female buffalos.”

They were blamed by the local indigenous people for a 5.9-magnitude earthquake which hit Ranau, 20km from the Kinabalu Park, on Friday. The death toll from the quake stands at 18.

Hawkins, a master’s in aeronautics and aerospace engineering student, was said to be “very upset” while being held in a Kota Kinabalu jail.

Locals believe the mountain is sacred place where spirits of the dead reside.

Deputy Sabah Chief Minister Tan Sri Joseph Pairin Kitingan had said the tourists “showed disrespect to the sacred mountain” by stripping down to pose naked on the morning of May 30, at the 8km mark of the two-day trek up Mount Kinabalu.

News reports said 10 tourists undressed and took photos, which was reported by their protesting guide, according to Malaysian police.

Ronny Cham, Hawkins’ lawyer in Kota Kinabalu, told MailOnline they did not know when she would be appearing in court after police obtained a four-day remand order.

They are being investigated for indecent behaviour.

The men had stripped naked while most, if not all, of the women were topless in the photos, which were circulated on social media. – June 11, 2015.