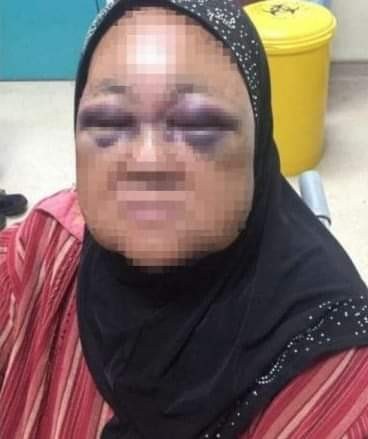 A 69-year-old Malaysian woman sustained serious injuries to her face after she was allegedly punched and slapped by her grand daughter’s husband for not stopping his 8-month-old daughter from crying.

Jasin District police chief Deputy Superintendent Arshad Abu said the victim suffered injuries to her forehead and bruises to both eyes in the 6am incident on Monday.

He said the victim was being treated at Jasin Hospital and would be referred to Melaka Hospital to be checked by an eye specialist, adding that she was at risk of losing her eyesight due to the seriousness of her injuries.

“Initial investigations found that before the incident, the victim’s granddaughter was in the room, and the baby was crying in the living room. The suspect then used abusive words and alleged that the victim was not taking care of the baby before hitting her until she fell. Soon after assaulting her, the suspect fled with his wife and child,” he said.

The suspect, who did not have a permanent job, and his wife had been staying with the victim since they were married. Their expenses were fully borne by the victim who worked as a cook at an Islamic school canteen for RM250 monthly salary.

The police detained the 24-year-old suspect in Bachang at 11pm the same day, adding that he tested positive for drug abuse.

The suspect had a criminal record for two previous drug offences, he said, adding that the case was being investigated under Section 325 of the Penal Code for voluntarily causing hurt.