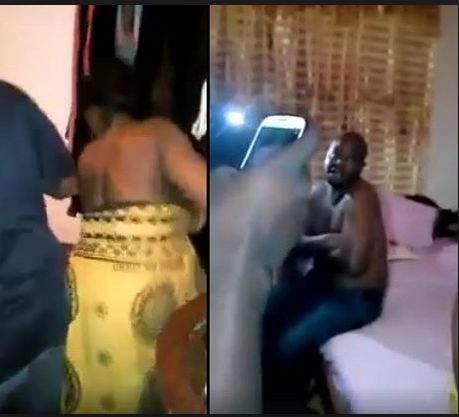 The Lagos State Police Command have trapped a man Mr. Ben Chimaeze, who sneaked into his neigbour’s flat to sleep with his wife.

According to reports,the incident happened at NNPC Road, close to Zenith Bank PLC in Ejigbo Lagos.It was gathered that Chimaeze had been wooing his neighbour’s wife Nneoma despite the fact that he knew that she was married.

He was said to have taken Nneoma out several times to pepper soup and drink joints and had given her money which she always accepted.But despite all the gifts, Nneoma had not allowed him to sleep with her not minding his pleadings.

On theday the incident happened, Nneoma was said to have demanded N100,000 and N50,000 differently and he transferred the money to her account. Mr. Chimaeze was said to have invited her to a hotel but she declined explaining that her husband was popular and if they went to any hotel, somebody who knew her husband might see them.

It was gathered that Nneoma then suggested that he should come to their flat since her husband had traveled and it will be better and safer for her.

According to P.M.Express, Chimaeze agreed and even brought a pack of Mr Biggs for her.

When he got there, Nneoma told him that she will not like to use condom and therefore that he should go to the bathroom and freshen up.Unknown to him, there was trap set for him by the woman and her husband.

Police sources said that while Chimaeze was in the bathroom, the police arranged by the couple then moved in, took video and asked what he was doing there at that period.

His clothes were seized and Nneoma’s husband gave him boxers’ pant which he wore and he was detained at the Command.

At the Command, he wrote his statement and confessed that he went there to sleep with Nneoma as they had earlier agreed but did not know that it was a trap.

It was gathered that the husband had insisted that Chimaeze must cough out N5m and directed the police at Zone 2 to detain him until he pays the money.