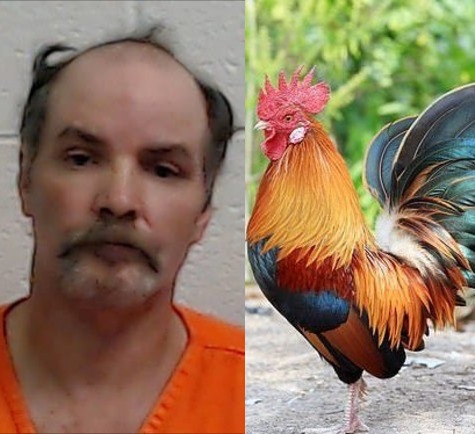 A West Virginia man has been charged with murder after he was accused of gouging out his neighbor’s eyes with his thumbs during disagreement over a loud rooster.

Richard Ellison, 47, was arrested on Sunday, May 17, by the Mercer County Sheriff´s Department in relation to the killing of 72-year-old Benny Foutch.

During questioning, Ellison told a detective that he killed his neighbor’s rooster because it was crowing loudly and then gouged out Foutch’s eyes because “Lucifer made him do it,” according to a criminal complaint.

The Princeton Rescue Squad found the body of the victim outside his home on Reese Harmon Ridge Road with blood coming out of his eyes.

The document stated that when a detective interviewed Ellison’s son, he said his father had brought the dead rooster back to his own property, and the son disposed of it.

Ellison then reportedly told his son he killed the cockerel and pointed towards his neighbor’s yard.

The son then walked over to Foutch’s residence and saw the man’s lifeless body laying on the porch.

“When looking at the victim, the gouging out of his eyes appeared to be his cause of death,” the compliant said, but the body was being sent for autopsy.

Foutch was described as a cancer patient who had a prosthetic leg.

Ellison’s girlfriend told the authorities that he was angry about the crowing and went to Foutch’s home, where she soon heard beating sounds followed by angry yelling.

The woman had left out of fear, and when she returned later she said Ellison admitted to her to killing both the rooster and its owner.

The detective who interviewed Ellison wrote in his report: “I asked him what happened with him and Benny, he then made the hand motion of pressing his thumbs to his eyes.

“He advised he went up there to kill the rooster because of a movie he had watched and because it was crowing. He later explained that he pressed his thumbs into Benny’s eyes, he advised that he stayed there until he knew Benny was dead.

“He made a reference that Lucifer made him do it. He kept asking me to shoot him, that he deserved it. He then talked about getting somebody in the jail to kill him.”