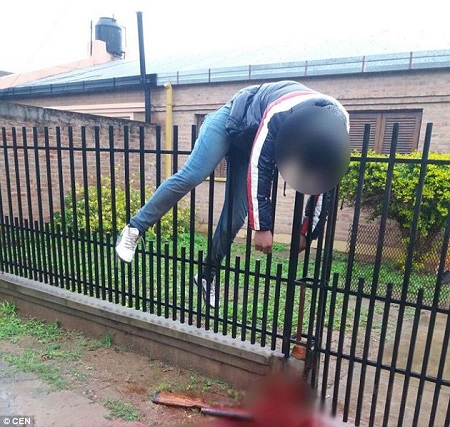 A man identified as Anibal Fernandez, has mistakenly shoot himself while trying to jump over a fence after shooting his ex-girlfriend new lover.

The tragic incident occurred at the girlfriend’s house in the town of General Pinedo, in the Argentinian province of Chaco.

According to reports, Fernandez shot his ex-girlfriend’s new lover, Daniel Campos, four times in the arms and chest after the two had an argument. Unfortunately, while trying to jump over the fence of the house in order to escape, he  accidentally shot himself.

The ex-girlfriend, Carina Carabajal, said she heard a gunshot outside the house not long after Fernandez flee the crime scene. Upon rushing outside, she saw Fernandez  on the fence.

Meanwhile, the case is currently under investigation.