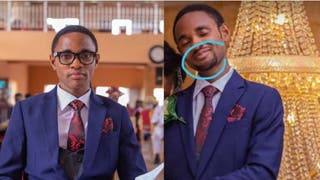 A Nigerian man has taken to social media to lament over an incident that occurred on his wedding day which he was not comfortable with.

The man identified as Emolad said that the church forced him to shave his beard or he would not be wedded on that day.

He shared a photo of him before his beard was shaved and him after the shaving which he did so so tha they can proceed with the wedding ceremony.

Emolad said that his best man’s beard was also shaved against his wish, adding that the incident took him time to heal.

In his words; ”Still hurts till now, on my wedding day, I got the greatest shock of my life for this right there in the church, this was shaved. A lot of people ranted. They didn’t start wedding till I shaved completely. They said I can’t get to heaven wit dt beard. I’m a leader.

I was so embarrassed. We were taken to the mall, and shaving still was used in my beard and my best man’s beard against our wishes. For the wedding to hold. It took me time to heal up ..it hurts. So people keeping beard, no heaven for you ooooo

You people would know the pain I go through everytime someone comes visiting and checks through our photo album. I’m tired of explaining what transpired. Reason I’ve forgiven but difficult to forget. Worse embarrassment ever.”