Man set to marry his fiancee’s younger sister in Bauchi 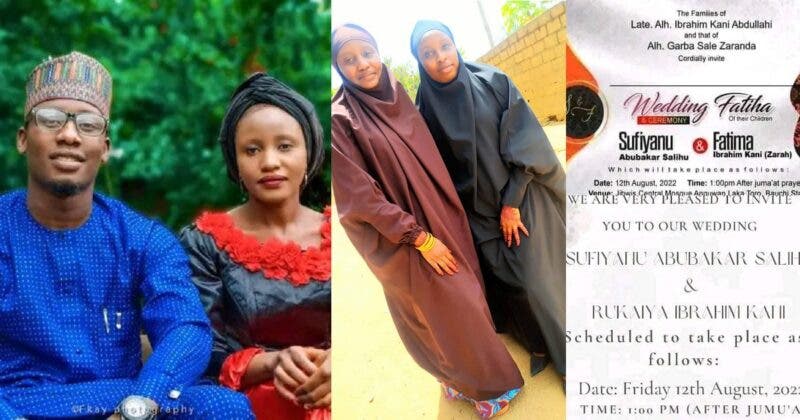 Sufiyanu Abubakar Salihu is set to marry his late fiancée’s younger sister, Fatima Ibrahim Kani, one week after her death in Bauchi.

The young man had taken to Twitter a few days ago to mourn his fiancée, Rukaiya Ibrahim Kani who died on Wednesday, July 27, two weeks after their wedding.

Salihu will now marry Fatima Ibrahim Kani, the younger sister of his deceased lover, on August 12, the day he was meant to wed Rukaiya.

Sharing the wedding invite, the elder brother of the sisters, Aliyu Ibrahim Kani, took to Facebook on Wednesday, August 3, to share the new invitation card with Rukaiyat’s name replaced with Fatima’s.

When I was confronted with the reunion again, it tooks me so much more to believe but we can denied the fact that life goes on. I pray for my late Sister Aunty ummi Allah ya jikanta Allah ya Mata rahama and Allah ya sanya alkhairi a cikin wanann aure da za ayi da zara’u. You might also think as much as you can but prayers is all we need at this moment.

“Late Sister Rukayya Ibrahim Kani issa a graduate of public health and so zara too issa graduate of public health from Bauchi State University. She’s an immediate sister to late Aunty ummi same father, mother. Everything about them is equally the same. It’s happening again. This is a lesson and all thanks to our parents and a special one to both malam sufiyan and sister zara. Allah ubangiji ya kaimu lokaci Allah ya sanya alkhairi. Allah ya jikan Aunty ummi.” He wrote.