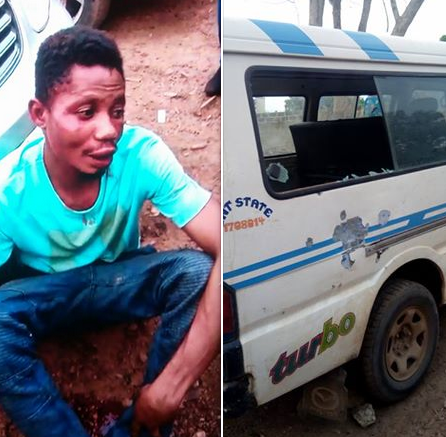 A father got the shock of his life after robbers drove off his car from where he parked it with his daughter inside.

The father had gone to pick his 3-year-old daughter from school, then stopped by at the workshop of an artisan repairing his pumping machine at Sokori area of Abeokuta, Ogun State capital.

He parked his Toyota Corolla by the side of the road with the engine running and his daughter in there and went into the shop. While in the shop, he noticed his car move but thought he wasn’t seeing clearly. Before he could decide on a course of action, the car sped off.

Stunned, the father raised alarm and that got the attention of concerned citizens, including motorcyclists who chased after the thief.

Fortunately, he was caught, beaten, then handed over to officials of the Federal Special Anti-Robbery Squad (FSARS), Abeokuta.

Upon interrogation, it was gathered that his name is Samuel Akinwale, 32. He confessed that he belongs to a five-man car snatching syndicate and he led the FSARS officials to their hideout.

At the hideout, a gunfight ensued and the gang members shattered the side screen of FSARS’ operational bus. Samson was also hit by a bullet in the gunfight and he was taken to the hospital where he was confirmed dead.

Now, family of the deceased robber have begun threatening the father whose car was snatched for being instrumental in the arrest and killing of their son.