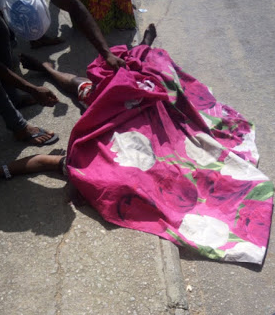 A yet to be identified young man was shot dead at close range in Calabar, Cross River on Sunday.

He was picked up from his residential area by a group of men in a tricycle. He was shot in the head and abdomen, before his body was dumped by the corner of the road.

According to multiple reports, he was killed due to a romantic tussle for a girl between him and one of his killers.