Mom breastfeeds her 5-year-old daughter,claims it prevent her from falling sick 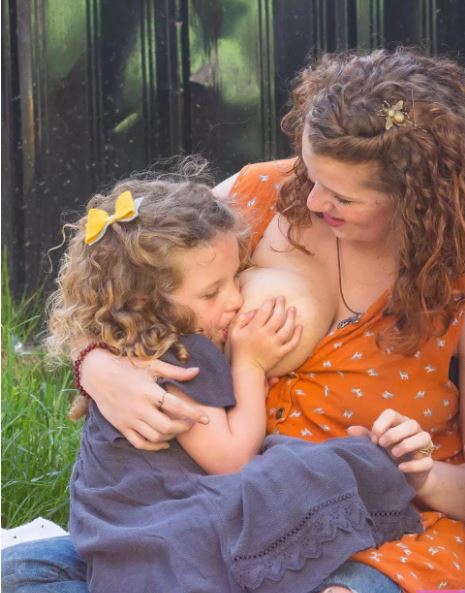 Emma Shardlow Hudson, 29, from Grimsby, Lincs, still breastfeeds her five-year-old daughter, Alex, before and after school every day, claiming her milk is so good that it prevent her children from getting ill.

When Alex started nursery, Emma claims her daughter didn’t pick up any of the same coughs and sniffles as the other children and put it down to her breastmilk.

Emma said: “It’s one of the biggest achievements of my life for sure, being able to nurture a child with my own body.

“It’s a completely selfless thing to do, but it’s probably the hardest thing I have ever done in my life too.

“Before Alex was born, I wasn’t sure if it was a normal thing to breastfeed for so long.

“But it wasn’t even a conscious decision to keep feeding for so long – I just thought why stop when it’s good for them? My attitude has changed over time.

“When she started nursery there were quite a few bugs going around and she had nothing in comparison to her classmates.

“My kids are rarely ill and I’m almost 100 per cent positive that that is because of the antibodies in the milk.

“She’s always been a comforted baby and wants milk when she’s upset, but I do think there’s a lot about the antibodies which is really good for her.

“It’s nice for me to be able to provide that for her.

“My husband Stuart [who is a chef] is quite happy with it all. He can see it helps her so he’s like, whatever’s best for her and you, which is what it is.

“He’s not really got any massive opinion on it so long as everyone is happy. Obviously he knows the benefits of it. He’s really supportive of it.”

However Emma thinks that Alex will eventually stop breastfeeding on her own.

She said: “Quite a lot of children have weaned by this point, but Alex has always been a massive comfort feeder.

“She’s continuous because it’s not just for the milk – but I do think she’ll stop soon, she’s heading that way.”