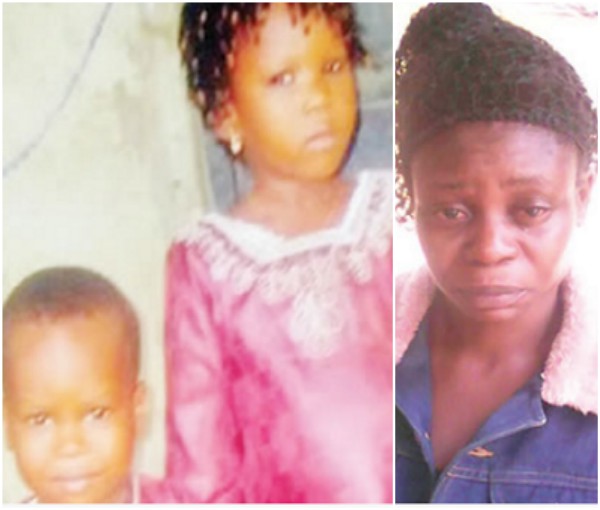 3 years ago / 491 Views
Following the abduction of their two kids who are yet to be freed by their apprentice on November 28, 2016, the family of four-year-old Farouk and six-year-old Kafayat, have been thrown into confusion.
According to the Father of the missing kids, Fatai Azeez, Austin who denied vehemently of abducting her boss’ kids after she was arrested by operatives of the Special Anti-Robbery Squad, Lagos, added to their distress as the SARS officers told the family to forget about the children as Austin had been released.
It was also gathered that the mother of the kids, Suliat, was taken back to her hometwon in Oyo State as she had since the incident attempted suicide 2 times, and recently tried that again by taking Sniper.
The suspect Austin who presented herself as Grace John to the family, resumed as an apprentice at Suliat’s hairdressing workshop in the Okokomaiko area of Lagos on a Thursday, and disappeared with the children same day while their mother was away.Things took a bad turn when  she sold off a  certain child identified as Oluwasemilore, daughter of a bead artist with whom she was working as an apprentice. The child had allegedly  been adopted as the last buyer’s daughter when Austin was arrested in Badagry.

With no news of her kids, Suliat sunk into depression.

“Since that time, she could not bring herself to understand how she could lose two children in a day. The first attempt was when she was just throwing herself on the floor and smashed a stool on her own head. She picked a knife and was about to stab herself when people restrained her.
“Shortly afterwards, she wrote a suicide note with a knife by her side. People were, however, able to take the knife from her. When I could no longer bear it, I asked that she be sent to her village in Oyo State for proper care. When there was no one around, she drank Sniper. She has not regained her health since that time.”

“I called and begged him to use all means to get the girl to confess where she kept my children, but he said the girl denied abducting the kids.
“Later, when I called to know what was going on, he said he had already taken the matter to court. When I asked for the name of the court, he said he never told me he took her to court. He appears to have been compromised.”