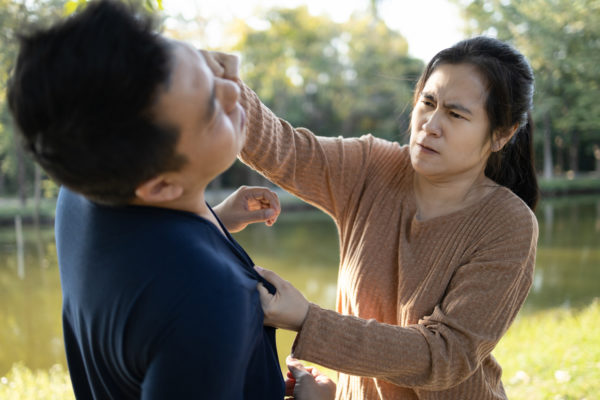 We met a long time ago.Before you know it we are married and i moved into her flat. Before that time I was sharing a flat with two of my friends.  We started having children. Not the way I wanted it but she was too much in a hurry, so I went along with it. Another thing I suggested was that we are only going to have 2 children and she said that’s okay with her too even though she wanted more.

I started noticing difference in her behaviour shortly after I moved in with her. Any little argument she would get seriously angry and start destroying things in the house.

The day I knew I have had it. That I am really in big trouble was the day she slapped me over a disagreement about a programme we are watching on tv even though she apologised later but it was a big shock to me.

I knew I am in trouble, but I stayed because of my kids.

Then she got pregnant again. This was a woman that told me she is on pills so as not to get pregnant but unknown to me she was lying. It led to a very big argument during which she slaps me in the process. I did not do anything. I could not have done a thing she is pregnant.

What now broke the camel back was when one of her brothers accused me of beating his sister because of pregnancy, apparently, she has been going behind me telling her family lies about me.

I got home accused her why she said that to her family, she got very angry asking me why I was talking to her family behind her back. She was so angry that she started chasing me around the house with a knife.

I managed to escape and that was the last time I went there. Left all my things and never went to the flat again. Because I am now scared of her. She is just too dangerous to live with.

The situation now is, she is begging me secretly to come back but her family are yet to know the reasons I left the house in the first place. She doesn’t want me to tell them for her not to look bad .

What should I do please? I need your advice.