My boyfriend is cheating on me with his new neighbor. How do I handle this? 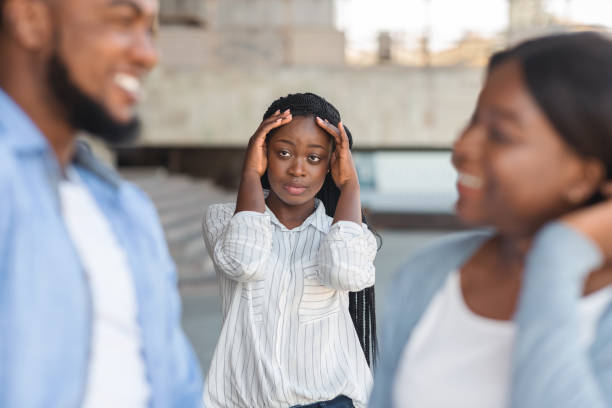 I have been dating my boyfriend for two years now. He recently relocated to a new area and I no longer understand his actions especially with his neighbor. There’s this lady that lives next door to him and to be honest, she is very very beautiful. You know all these Lagos hot chicks that you can’t pass without noticing them.

After about a week, I saw her again and when I asked my boyfriend why she came, he said she needed help with fixing her DSTV. He later went and helped her out. I saw her like three more times and each time I confront my guy about it, he will always come up with one lame excuse.

There was a day I went there, she was around and she was not well-dressed. She was wearing a revealing short dress and when u entered, I noticed how shocked both of them were. She hurriedly left and my boyfriend didn’t know what to say. He stammered and said she only came to say hi. I could see the shock written all over his face and how uncomfortable he was.

There was also another day I called him and I could hear the girl’s voice in the background. When I asked him who was there, he said it was nobody. I let it slide. Two months ago, I went to spend a week at his house. I noticed how close both of them were and how she knew important details about him even those I didn’t know. He would always go to her house with excuses that are not worth it.

One night he went there after she called him to help move her couch. He left and slept over at her place. I called him many times and he didn’t pick. I went to knock and no one came out. I was so mad. The next day when he returned, I confronted him and he said the girl offered him alcohol and insisted she drink, then he slept off. I knew he was lying and we had a hot argument and he slapped me.

I left angrily and didn’t take his calls for some weeks. He later called after three days and apologized. He came over and said nothing was going on between them. I later forgave him and we were back together. He changed and became loving.

Three weeks ago, I went to his house and found some under wears and a sanitary pad. I asked him whose own they were and he said his sister left them when she came to visit him. Meanwhile he never told me his sister visited even when we spoke everyday. When I asked him why he didn’t tell me, he said he forgot. I also saw food stocked in the freezer and he still insisted it was his sister that made them.

See, I know he has been lying to me. I just can’t get myself to believe he is cheating on me with this so-called neighbor. We have been together for two years and we never had cheating problems. We were both faithful to each other. His neighbor is very fine and looks like a runs girl with all her iPhone and expensive hairs. I don’t understand why he would cheat on me after all we have been through. I love him deeply and I’m so angry that things are going this way. How do I win my boyfriend back? I can’t afford to lose him to this gold digger.

Comments to My boyfriend is cheating on me with his new neighbor. How do I handle this?