My wife doesn’t satisfy me 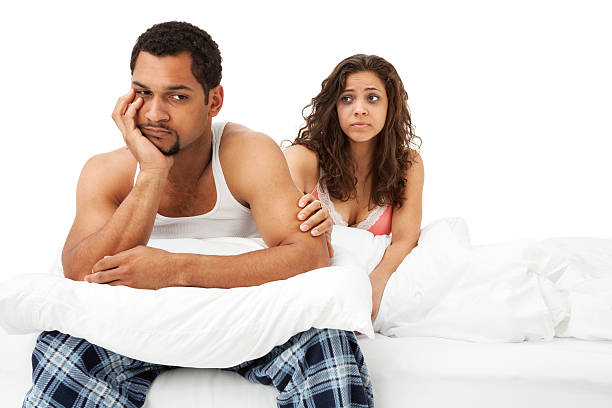 Please keep me anonymous. I am in need of your suggestions in order to save my marriage. I am a married man and a father of two. My marriage is barely surviving. Since we got married it is almost as if I have been managing and patching things up. Our sexual life is very terrible and it it beginning to frustrate me. I don’t think I can manage any more. My wife does not like sex. This is a terrible thing to say but I have to do this because I can’t cope anymore. Before we got married, my wife was very lovely and romantic. I loved her so much and I was willing to play by her rules. I also someone who loves sex and in had a couple of sex experiences before getting married. When I met my wife, she was too good for me to let go. I just wanted to be friends with her and nothing serious but when I got closer to her, I realized how much of an amazing person she was.

Read also: My girlfriend is getting married to another man

We got closer by the day and I started asking her to be my girlfriend. It was very difficult for me. She just wanted us to be friends but I wanted a relationship. I kept asking her out but she refused. I was persistent. I loved her and I wanted to be with her by all means. I couldn’t explain the feeling since I wasn’t someone to stay around a woman for a long time. The more I tried to let go of her, the stronger the desire to have her as my girlfriend became. At one point, she started avoiding me because she felt I was distracting her from doing other important things and the best thing for her to do was to avoid me so she could concentrate. After some time, I gave up but not completely. To cut the story, we started dating.

While we were in the relationship, she said she didn’t want sex. I am someone that loves sex but since she didn’t want to, I had to do as she said. It was very hard but I had to stick around. I don’t know how I did it but I was willing to stay with her and surprisingly, I didn’t cheat. We later got married and I thought things would get better but they didn’t. Initially, when I complained, my friends said it was because it was just her first time and I needed to give her time to adjust to having sex with me. Often she wouldn’t let me touch her and even when she didn’t, she wouldn’t let me last for a long time. The two kids we have now is by grace because she doesn’t want anything related to sex.

Read also: My husband wants us to share the family bills equally.

We have been married for six years and I have endured all these while. I have never for once cheated on her and I would never do that. I still love her so much and she is still a very good wife. She supports me and ensures our family is in order. Our kids are doing great and she is doing a great job as a mom, a wife and a career woman too. She balances everything perfectly and she still respects me. Which is why I have endured all these years because she gave me a reason to. I felt that if sex was the only thing she couldn’t give perfectly, then I could compromise and let go but sincerely, it is not easy and I don’t know if I can continue anymore. Please I need suggestions on what I can do to make our sex life great