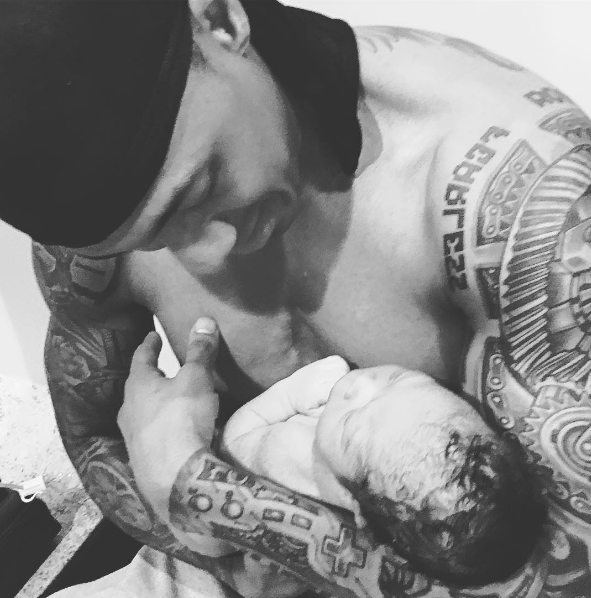 Hollywood actor and poet, Nick Cannon, has welcomed a new baby with his girlfriend, Brittany Bell.

The ‘Wild n Out’ host, took to IG to share the happy news, posting a photo of himself holding his new son and captioning the picture:

Nick Cannon has welcomed his third child, a boy with his ex-girlfriend, Brittany Bell..He wrote

Weeping may endure for a night, but Joy cometh in the morning! No matter how hard the world may hit you, God always reminds us of our purpose! #TrueHappiness
Welcome to Earth Son!
Golden “Sagon” Cannon 2/21/17 #Awakened

Nick has two kids, twins with his ex-wife, Mariah Carey.

When Nick was interviewed on Brttany is ex being pregnant with his child he said:

“It’s outstanding,” the 36-year-old actor shared. “Honestly they say even in unexpected situations, you still embrace the beauty of bringing a life into this world, because that is what life is all about.”

On Nick’s relationship with ex, Mariah and he twins, a source who also spoke with ET said:

“Nick has been really supportive and amazing,” the source said. “They are in a great place and had a wonderful festive Thanksgiving with the kids in Honolulu and they all helped cook together.”

Mariah, on her divorce from Nick when the couple surprisingly split, she said:

“I never thought I would have babies with someone and then get divorced. Like, ‘Oh, great job. Repeat your past,’

“But life happens. And it was supposed to happen. It’s fine. For them, I wish it hadn’t happened that way. For me, it was. … [singing Johnny Mathis and Deniece Williams’ ‘Too Much, Too Little, Too Late’] Guess it’s over. Call it a day.”