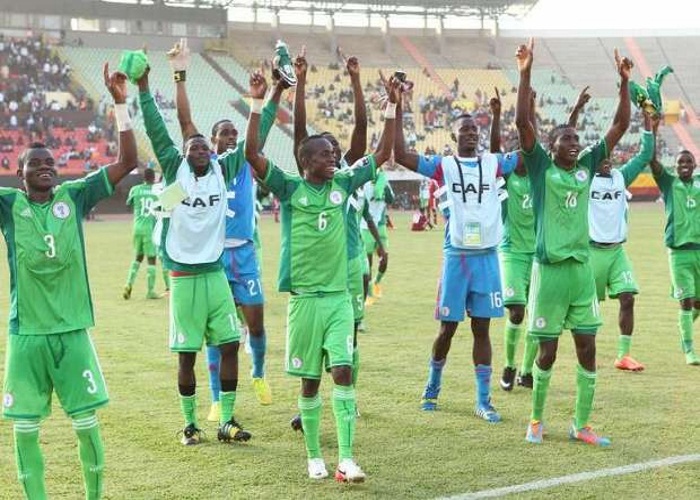 Saviour Godwin’s brace fired Nigeria to the brink of qualification for the last-16 as they beat Korea DPR 4-0 at the Stadium Taranaki on Monday.

Coach Manu Garba made three key changes to the team that lost to Brazil on Monday as he dropped Kelechi Iheanacho, Musa Yahaya and Isaac to the bench while Ifeanyi Mathew was still out injured.

After a shaky first half where they failed to cage the Asians despite having several scoring chances with goalkeeper Cha Jong Hun putting in a great performance that halted the Flying Eagles’ forwards, the reigning African junior champions put up a commanding second half display for their first win of the competition.

Captain Musa Muhammed’s rocket, which hit the inside of the post from 25 yards as Jong Hun looked on, was the side’s best chance in the first half.

The Korea DPR last man also pulled off a fantastic save off Taiwo Awoniyi’s follow-up free-kick by Muhammed.

Three minutes into the second half, Godwin put his team in front after Jong Hun misjudged Bulbwa’s cross.

In the 51st minute, Godwin doubled the tally with a cool finish in between the legs of a defender and goalkeeper after being fed by Awoniyi who skillfully found his way into the Asians’ backline.

Nigeria’s third was a fantastic one from Sokari as his laser-guided shot from the edge of the area screamed into the top left corner.

Substitute Isaac got the fourth after exchanging passes with Awoniyi who sliced through the Korea defence before the latter slammed home from a tight angle to deliver an emphatic finish to the African champions.

The comfortable win brightened Nigeria’s hopes of reaching the last 16 ahead of their final Group E game against Hungary on Sunday.