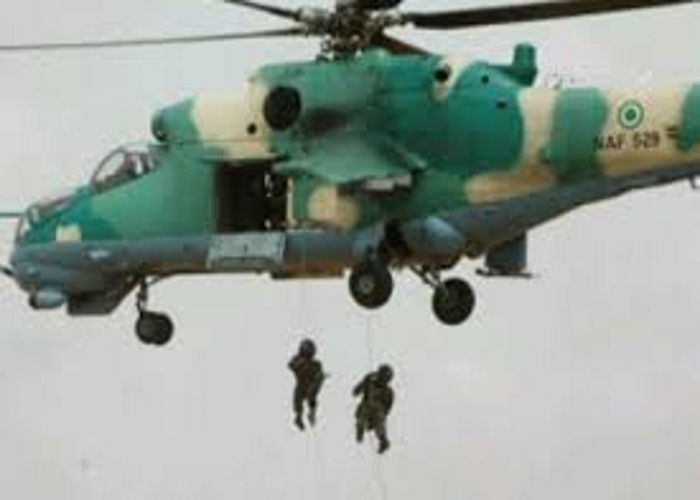 The Nigerian Air Force has recorded some giant strides in the last one year leading to the current successful onslaught against Boko Haram terrorists in every part of the North East where they have hitherto held sway.

Chief of Air Staff, Air Marshall Adesola Amosu said some of these was in the area of continuation of fleet, logistics and infrastructural renewal, which include acquisition of new aircraft like the King Air 350, Mi- Series Helicopter Gunship, UAVs and DA-42 Diamond Aircraft.

Speaking on the celebration of 51st anniversary of the force in Abuja, which also marks his second anniversary as the 19th Chief of the Air Staff, Amosu said “I am happy to inform you that so much have been achieved for the NAF within the period under review.”

In addition, he said the NAF have successfully installed and programmed newly acquired Harris 7850 multiband radios in the North East to aid operations against insurgency.

Some of the existing platforms reactivated within the period under review include the C-130 aircraft, Super Puma Helicopter Gunship and DO-228.

The NAF, which has been playing a pivotal role in the battle against terrorism also successfully conducted periodic deport maintenance and A-Check of Alpha Jet aircraft, C-130H aircraft, Mi-35P Heli and G-222 aircraft while also providing adequate spares for scheduled and unscheduled maintenance of aircraft.

He recalled that NAF was formally established on 18 April 1964 with the passage of the Air Force Act 1964 by the Nigerian Parliament with the objectives of defending the Federal Republic by air and giving effective training to its personnel in the air as well as on the ground.

Over the years he noted, the NAF has progressively grown to its present enviable position and has proudly justified its existence by performing its constitutional roles.

Amosu mentioned some of notable accomplishments of NAF as successful participation in the Civil War less than 3 years after its establishment; supporting Government Policy on apartheid as a frontline state by providing strategic airlift of arms and logistics supplies to Mozambique, Namibia, Angola and Zimbabwe; and participating in Peace Support Operations in countries such as Lebanon, Chad, Yugoslavia, Sudan and Mali.

Others are combat deployment of NAF ac to support Liberia, Sierra Leone, Cote D’Ivoire and recently Mali; training of Pilots and Engineers for West African Countries like Ghana, Benin Republic, Togo, Sierra Leone and Niger; internal security operations conducted nationwide and on many occasions (Maitasine and other ethnic and religion disturbances); and Counter-Terrorism (CT)/Counter-Insurgency (COIN) operations in the North East.

Amosu said under his command, the force has continued to provide air support through armed reconnaissance, ground attacks, combat air patrol, close air support, intelligence, surveillance as evidenced in the ongoing war against insurgency in addition to establishing four Forward Operational Bases (FOBs) at strategic parts of the country for quick intervention and deployment.

Within the period that he has been at the helm, Amosun said 123 foreign courses involving 426 persons of different specialties have been conducted while 14 new NAF units have also been established across the country including a Mother and Child Hospital in Badagry.