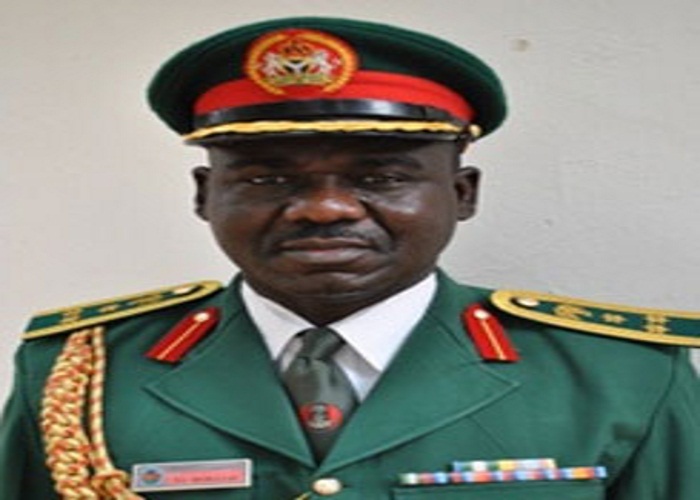 Yesterday, Nigerian Army Headquarters through the Directorate of Army Public Relations released the résumé of the new Chief of Army Staff (COAS) Major General Tukur Yusufu Buratai. Read that after the cut…

Major General Tukur Yusufu Buratai, the newly appointed Chief of Army Staff a seasoned military officer, was born on 24th November 1960 at Buratai town, Biu Local Government Area of Borno State. He had his Primary School Education at Buratai town. Thereafter, he gained admission into Government Teachers College Potiskum, Yobe State, where he graduated with distinction. The zeal to serve the nation made him to apply and gain admission into the prestigious Nigerian Defence Academy Kaduna as member of the 29 Regular Combatant Course (29 RC) on 3rd January 1981. On successful completion of his Officer Cadet training, he was commissioned as a Second Lieutenant on 17th December 1983 into the Infantry Corps of the Nigerian Army.

Since his commission, he has attended several courses and seminars both here in Nigeria and abroad and also served in many formations, units and training institution where he held command, staff and instructional appointments as follows; he attended the mandatory Young Officers Course Infantry (YOC) and Anti-Tank Platoon Commanders’ Course both at the Nigerian Army School of Infantry, Jaji. He also attended Watermanship Course at Amphibious Training School Calabar and Joint Operations Coaching Course, as well as Computer Appreciation Course. He attended Armed Forces Command and Staff College (AFCSC) for his Junior Staff Course and Senior Staff Course in 1994 and 1999-2000 respectively. Similarly, Major General Buratai has also attended Management Course at Ahmadu Bello University Zaria and International Conference for Directors of Planning, Research and Statistics. Others include Disarmament, Demobilization and Re-integration Course at Cornwallis Park, Nova Scota, Canada in 2000 and National Defence Course in Bangaladesh and the United Nations Staff and Logistics Officers’ Course in India, amongst others.

He was a Platoon Commander at 26 Amphibious Battalion Elele, Port Harcourt, from 19 January 1984 to 30 September 1986. He was a Military Observer at the United Nations Verification Mission II in Angola from 1 October to 30 August 1987. He was again a Platoon Commander at 26 Guards Battalion from 1 September to 15 November 1987 and later served as Company Second in Command (Coy 2ic) in the same unit from 15 September 1991 to 14 August 1994. He was also a Platoon Commander at the Lagos Garrison Command Camp from 15 August 1994 to 19 April 1995.
Major General Buratai has also served as Staff Officer to the Principal Staff Officer to the then Head of State at the State House from 20 April 1995 to 23 July 1998 before his appointment as Officer Commanding (OC) at 82 Motorized Battalion from 24 July 1998 to 11 July 1999. He was Second in Command to the Commanding Officer of 81 Battalion from 1 August 2000 to 12 April 2000. He served as General Staff Officer Grade 1 in Charge of Training and Operations (GSO1 Trg/Ops) at the Army Headquarters Garrison from 14 February 2001 to 31 July 2001. Thereafter, he became a Directing Staff at the Armed Forces Command and Staff College (AFCSC) from 1 August 2001 to 16 March 2004 where he was awarded the prestigious “Pass Staff College Dagger” (psc(+)) appellation.

Subsequently, Gen Buratai served as Colonel Plans at the Army Headquarters Department of Army Policy of Plans from 17 March 2004 to 4 December 2007 and then Assistant Chief of Staff in charge of Administrative Matters (ACOS G1) at the Headquarters Infantry Corps Centre from 16 February 2009 to 29 December 2009 before his promotion to the rank of Brigadier General. He was again at the Armed Forces Command and Staff College where he served as Director of the Department of Land Warfare from 30 December 2009 to 27 January 2011 before his appointment as Commander 2 Brigade Nigerian Army where he served from 28 January 2011 to 25 January 2013. While at 2 Brigade Nigerian Army Port Hacourt, he was also the Commander, Sector 2 of Operation Pulo Shield Joint Task Force. On his promotion to the rank of Major General, he was appointed Commandant, Nigerian Army School of Infantry (NASI), Jaji where he served from 26 January 2013 to 16 February 2014. On 17 February 2014, he was appointed Director of Procurement at the Defence Headquarters and was appointed Force Commander of the newly reconstituted Multinational Joint Task Force (MNJTF) on 18 May 2014. Gen Buratai was appointed the 20th Chief of Army Staff on Monday 13 July 2015.