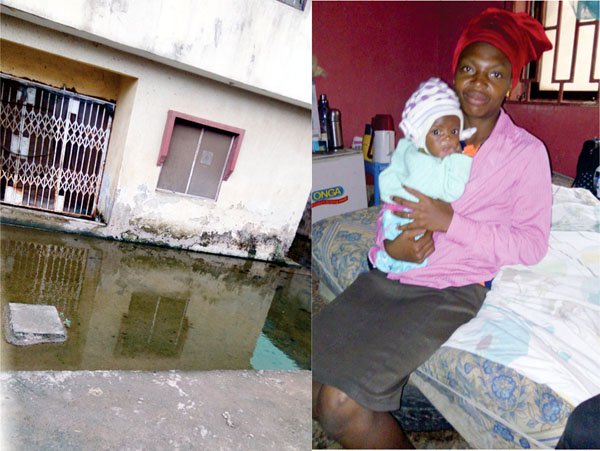 A Lagos based couple, Hannah and Charles Nwankwo, have narrated how they lost two of their sons due to extreme poverty. The couple who reside in the Okota area of the state, say their sons died because they could not afford to give them the best of medical care when they fell ill. Speaking to The Nation, Mrs Nwankwo said

“When I gave birth to my first child Chukwuebuka Christopher, he had a condition which caused him to convulse regularly. We were managing it traditionally with palm kernel oil and some other things; but one day in March 2017, Chukwuebuka again began to convulse. On this occasion, we had unfortunately run out of the medicines, due to lack of money. To make matters worse, my husband was also not around to do the running around for cash. I was also eight months pregnant and Chukwuebuka was going to be three. I became afraid, panicky and started looking for people to help me. With neighbour’s help, we rushed him to Isolo General Hospital, where he was given injection and he immediately went into coma, which he never came out of. We really never took him to a hospital anytime he convulsed because the first time it happened and we took him to a hospital, we were told his condition wasn’t medical and that we should lean more towards traditional treatment. Since then, we managed to put it in check until this fateful day. It was after he went into a coma that we were told we should never have brought him to the hospital, as someone who is convulsing should not be injected. While in coma, they carried out series of tests on him and concluded that his life was in the hands of God and we should just be hopeful. But eventually, we lost him.

In the meantime, my second son also took ill. I still can’t understand what happened to Ebubechukwu; I can’t really explain it. He was one year, going to two and not sick. You know as children, he and his brother were always together; they played together, did everything together and were indeed very close. So, when he saw his brother lying in the hospital bed lifeless, he pulled and called his name in desperation. When he didn’t respond, he started crying and we consoled him. Thereafter he just started behaving funny and strange and eventually died.”

Mrs Nwankwo says life has been difficult for them as her husband of three years who works with the Lagos State Waste Management Authority, LAWMA, has been finding it difficult to fend for his family because his N12,000 a month salary is never regular. She says her husband is currently being owed four months salary.

“We have been managing by God’s Grace. My baby is not eating well. We go hungry for days; sometimes because we don’t have money to buy food and the baby doesn’t get enough breast milk. She is five months old and the last time we checked, she weighed just 4kg, which is the usual weight for new born babies.”

Mrs Nwankwo who is a teacher by training, says she would love to teach again as it is her passion. According to her, she has taught in two good schools but lost the jobs.

Asked how they meet their rent obligation, she said: “We don’t pay for this place because of the water (flood) and because the building is abandoned. The caretaker just allowed us to move in to manage. The place gets badly flooded when it rains and our things get soaked. The water even gets to our ankle inside the house.”

Narrating his ordeal, her husband, Charles said life has been a living hell for him

“I work with Lagos State Waste Management Agency, LAWMA and I am being paid N12, 000, but for four months now, I have not got a kobo as salary. Because of this, life has been hell for me and my family. What I do now is take up menial jobs during my free time, since my work hour with LAWMA is between 7am and 1pm. It was partly because of this lack of payment that I lost my children to the cold hands of death. When we had Chukwuebuka, they said he had cerebral palsy and we were referred to the Physiotherapy Department of Isolo General Hospital. We kept to the appointments until he stopped responding and we had to stop taking him there.  Initially he could not stand on his own, but when we stopped he started improving. Unfortunately, there was a day I was not at home and my phone was switched off due to low battery (we have never had power in this house since we moved in because we cannot afford it); my son had crisis and I could not be reached. My wife always knows where to find me, so she rushed over to tell me that my son was convulsing and had been admitted in the hospital. When I got there, I saw my son unconscious; he had been given injection. From that day, Chukwuebuka never opened his eyes. He spent a month on oxygen before he finally gave up. The strange thing about their deaths is that my second son who was not sick at all died before the first. My wife put to bed on the 7th of February 2017, so I stayed with the boys while she was upstairs in the maternal ward with the baby. While I was still wondering what befell my second son, the doctor told me I should never have been bringing him to the hospital, where sick children were on admission, but I had nobody to entrust him with. He said that was what affected him. My second son died on February 18th 2017, while my first child breathed his last on February 25th 2017. Before their death, whenever we went to the hospital and they needed anything, my wife would stay with them while I went to get whatever they needed, and then I’d go home with my second son to sleep. But one night, my son couldn’t sleep; he was just behaving strangely. When we got to the hospital the next day, he continued the strange behaviour; he would raise his hands and roll over and hit his head on the baby’s cot. The nurses and matron were asking him if he was angry that his mother put to bed but he kept on behaving in the same manner. Nobody knew what was wrong. Later the doctor told me that my son was not responding to pain. But a bigger shock awaited me, as he soon told me that he had gone into coma. I went to him, touched him, pushed him, calling his name, but no response.  He was still breathing but was now on oxygen like his brother. The doctor thereafter told us to pray to God, but within 15 minutes, he died.”

Asked how he managed to buy drugs and even pay for oxygen, Mr Nwankwo said: “People and patients in the hospital were helping us with money.”

Like his wife, Charles Nwankwo also started out with great hope and potential. He was a student of Banking and Finance at the Lagos State Polytechnic, until lack of funds forced him out. He recalled that his first love was Law, which he wanted to study at the University of Lagos. “If I have another opportunity, I will go back to school because I believe that half education is very dangerous.”