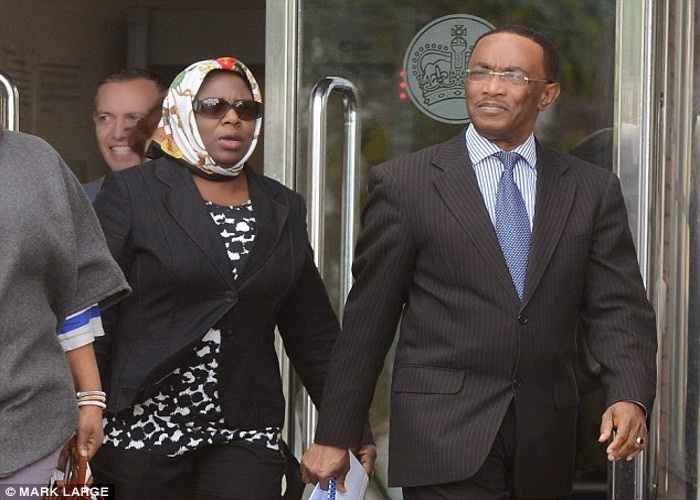 A west London court has heard a couple held a man against his will from the age of 13 for 24 years before he finally managed to escape from them and inform police.

A Nigerian NHS doctor enslaved a man in his home for 24 years after smuggling him into Britain as a child, a court heard yesterday.

Dr Emmanuel Edet demanded to be called ‘master’ as he beat his victim and subjected him to a ‘life of misery’, it was claimed.

Emmanuel Edet, 60, and his wife Antan Edet, 58, a senior hospital nurse, are accused of stripping Ofonime Sunday Inuk, 39, of his passport and making him work up to 17 hours a day.

The Nigerian orphan was left to bring up their two sons as they travelled across Britain working for a series of NHS trusts.

Yesterday Mr Inuk, 39, confronted the pair for the first time since allegedly escaping their West London home in 2013.

He told a jury at Harrow Crown Court he had to sleep on the floor and was barred from using many rooms except to clean them.

He described how he was scared of the couple after realising they would not pay him or send him to school. In a soft voice, he said he was not ‘free’, adding: “I could only take the children to the park, that was the only time I could take them out.”

In a police interview, he said he was known as a ‘house boy’, adding: “My role is to stay in the house … I always do everything in the house, sir … clean, cook, wash car, the gardening, ironing … or maybe like a slave. That’s called slavery.”

Dr Edet, an obstetrician and gynaecologist, and his wife are being prosecuted under modern anti-slavery legislation.

The jury was told Mr Inuk escaped after hearing about another case in the media while the couple travelled to Nigeria for Christmas.

He contacted a charity which tipped off police who were stunned to find him alone in their £450,000 four-bedroom terrace home in Perivale, monitored by a CCTV camera.

He told them his ordeal began when he was taken under the wing of the Edet family aged 12. He was the oldest of eight children. His family had fallen into poverty when his father died and he willingly went to work for the Edets in Lagos, Nigeria, being paid £2 or £3 a month.

A short time later the family moved to Israel and then, when he was 14, to Britain. They brought him into the country by changing his name to their surname and falsely adding him to their passports, it is alleged.
They stayed at addresses, including hospital accommodation, in Chatham, Scarborough, Walsall and London.

Roger Smart, prosecuting, said Mr Inuk slept on the kitchen floor on a dirty foam mattress thrown out by a hospital. He was expected to get up first and begin cleaning the house, but was told to sweep instead of using a vacuum cleaner because it was too noisy.

Mr Inuk was also forced to work as a domestic cleaner, wash clothes by hand because the Edets said it was too expensive to run the washing machine.

He always ate by himself, kept his few possessions in a single bag and was not allowed to sit in the front room or go upstairs.

Mr Smart said the couple “to all intents and purposes owned him, controlling nearly every aspect of his life down to his very name.

“Over a period in excess of 20 years they have deprived him of his identity, his rights to education and freedom of movement and the money he should have received. He has no means of returning to Nigeria. He was entirely dependent on them.’

At one stage he tried to undertake a college course in computer skills but the Edets stopped him, it is claimed. Mr Smart said: ‘”when he did not meet their exacting standards, they hit him and punched him – he recalls this particularly clearly in relation to his trying to apply for college.”

Mr Inuk did seek help but was turned away by police who simply recorded his case as a lost passport, and by social services who said they could not help because he was an adult.

The Edets deny cruelty to a person under 16, slavery and assisting unlawful immigration.